ADAM WISEMAN TAKES PICTURES of houses. What is so unique in that you may ask. True. There are hundreds of architectural photographers as there are photographers of home interiors. True again. So let me tell you what separates Wiseman’s pictures from those of the others. It is Adam’s soulful engagement with his subject—which are houses—that makes his series utterly unique.

The series he calls ‘Arquitectura Libre’ or ‘free architecture’ which he is currently showing at the Indian Photo festival in Hyderabad (on till December 13). Through these pictures he has been documenting houses of Mexican immigrants who live and work in the US but send their earnings back home to build these brightly coloured and quixotic houses in which they’re probably never going to come back and live. 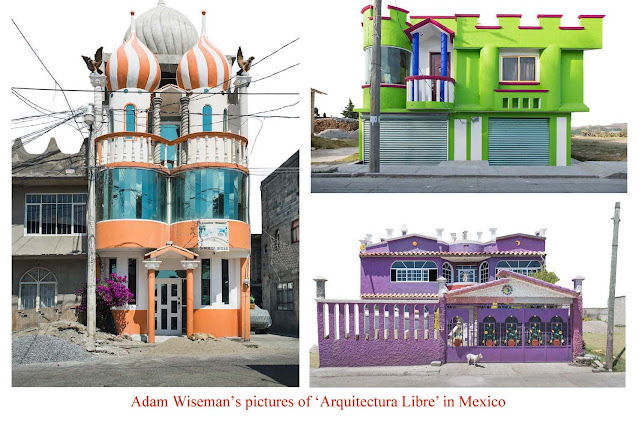 I spoke to Adam on video-chat about this series that had me hooked from the moment I first read his introductory note. Adam has been clicking these houses in Mexico because they capture a subtle essence of the immigrant experience. Where their lives in the adoptive country may obsess over cutting corners and surviving, back home they want to create an impression that is quite its polar opposite. That is of glorious ostentation and exposure to the best things in life.

What also struck me about the series is its desire to present to us a very different aspect of the immigrant experience—one that is not explored by many photographers—which is how visual memory is affected by the experience of a new, alien culture. And its possible ramifications in say how they start to dress or eat or even use their imagination.

Most of the houses Adam has documented in his long-term project are copies of Disney castles. There are also Modern rotundas, Kremlinesque domes, Art Deco layers and tiny replicas of massive malls. Adam tells me there is often a mismatch between the original intent of the house and its final realization because they are usually built from images sent by mail or Whatsapp. Which makes these dream houses products of a sort of double distillation where the form of the house is first visualized in the mind of the owner who sends an image with his suggestions of changes. In the second distillation the received image is ‘localised’ depending on what is and isn’t available. This is the most interesting part because this is where most of the interesting ‘tweaks’ happen. The Mexican equivalent of a ‘raj-mistri’, says Adam, has to be given full credit for the way he fashions these fantastical homes without having seen any of the originals.

There is also a hidden, psycho-social aspect to these homes that can be missed by someone only interested in the aesthetics of the project. Which also brings me to why Adam’s housing project is valuable and unique. Because this isn’t the regulation architecture of government housing nor the formal vision of trained architects, there would be a tendency by the arts establishment to ignore it and in the process completely miss the embedded story of “displacement, replacement, identity, classism, racism and mistakes” of people who travel far away from their homes in search of a better life.

Adam’s ‘free architecture’ has now also piqued the interest of academia and serious arts and architecture researchers who are beginning to see the truth he manages to unravel with each progression of the series. He has also taken pictures in south India of houses which though not of immigrants display elements of pastiche that are at once brilliantly original and eclectic.

The Indian connect actually points to an element of what we call ‘jugaad’ in north India which I would define as this ‘makedoability’. Or the ability to see a variety of functions in an object—many more than were originally intended—and using it to enlarge its purpose and functionality. In architecture and in aesthetics this makedoability can create remarkable things.

Article link on NDTV-Mojarto is HERE