RUST IN THE SKY (My Piece in Art & Deal) 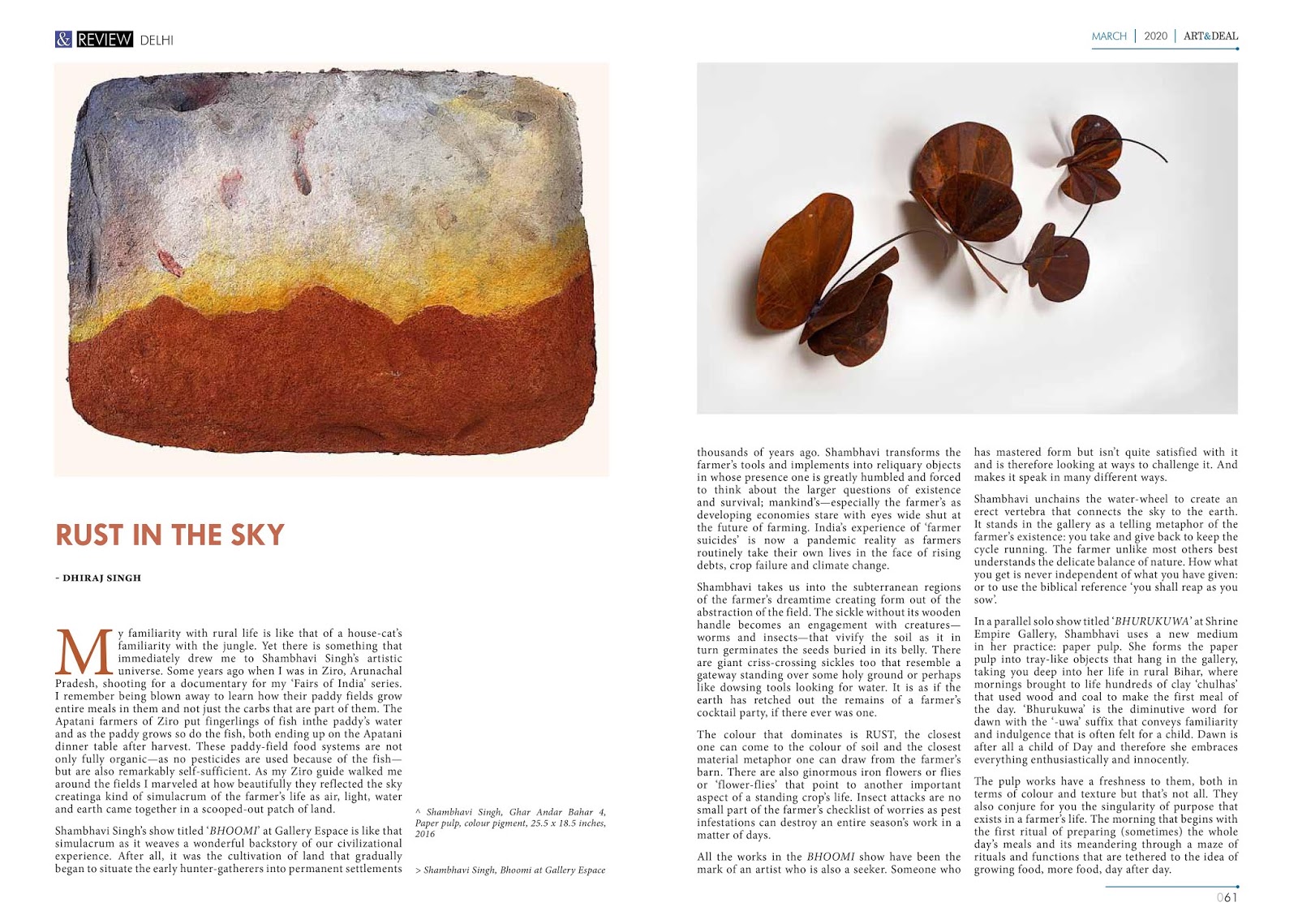 My familiarity with rural life is like that of a house-cat’s familiarity with the jungle. Yet there is something that immediately drew me to Shambhavi Singh’s artistic universe. Some years ago when I was in Ziro, Arunachal Pradesh, shooting for a documentary for my ‘Fairs of India’ series I remember being blown away to learn how their paddy fields grow entire meals in them and not just the carbs that are part of them. The Apatani farmers of Ziro put fingerlings of fish in the paddy’s water and as the paddy grows so do the fish, both ending up on the Apatani dinner table after harvest. These paddy-field food systems are not only fully organic—as no pesticides are used because of the fish—but are also remarkably self-sufficient. As my Ziro guide walked me around the fields I marveled at how beautifully they reflected the sky creating a kind of simulacrum of the farmer’s life as air, light, water, earth came together in a scooped-out patch of land.

Shambhavi Singh’s show titled ‘BHOOMI’ at Gallery Espace is like that simulacrum as it weaves a wonderful backstory of our civilizational experience. It was after all the cultivation of land that gradually began to situate the early hunter-gatherers into permanent settlements thousands of years ago. Shambhavi transforms the farmer’s tools and implements into reliquary objects in whose presence one is greatly humbled and forced to think about the larger questions of existence and survival; mankind’s—especially the farmer’s as developing economies stare with eyes wide shut at the future of farming. India’s experience of ‘farmer suicides’ is now a pandemic reality as farmers routinely take their own lives in the face of rising debts, crop failure and climate change.

Shambhavi takes us into the subterranean regions of the farmer’s dreamtime creating form out of the abstraction of the field. The sickle without its wooden handle becomes an engagement with creatures—worms and insects—that vivify the soil as it in turn germinates the seeds buried in its belly. There are giant criss-crossing sickles too that resemble a gateway standing over some holy ground or perhaps like dowsing tools looking for water. It is as if the earth has retched out the remains of a farmer’s cocktail party, if there ever was one.

The colour that dominates is RUST, the closest one can come to the colour of soil and the closest material metaphor one can draw from the farmer’s barn. There are also ginormous iron flowers or flies or ‘flower-flies’ that point to another important aspect of a standing crop’s life. Insect attacks are no small part of the farmer’s checklist of worries as pest infestations can destroy an entire season’s work in a matter of days.

All the works in the BHOOMI show have been the mark of an artist who is also a seeker. Someone who has mastered form but isn’t quite satisfied with it and is therefore looking at ways to challenge it. And make it speak in many different ways.

The water-wheel Shambhavi has unchained to create an erect vertebra that connects the sky to the earth. It stands in the gallery as a telling metaphor of the farmer’s existence: you take and give back to keep the cycle running. The farmer unlike most others best understands the delicate balance of nature. How what you get is never independent of what you have given: or to use the biblical reference: ‘you shall reap as you sow’.

In a parallel solo show titled ‘BHURUKUWA’ at Shrine Empire Gallery Shambhavi uses a new medium in her practice: paper pulp. The paper pulp she forms into tray-like objects that hang in the gallery taking you deep into her life in rural Bihar where mornings brought to life hundreds of clay ‘chulhas’ that used wood and coal to make the first meal of the day. ‘Bhurukuwa’ is the diminutive word for dawn with the ‘-uwa’ suffix that conveys familiarity and indulgence that is often felt for a child. Dawn is after all a child of Day and therefore she embraces everything enthusiastically and innocently.

The pulp works have a freshness to them both in terms of colour and texture but that’s not all. They also conjure for you the singularity of purpose that exists in a farmer’s life. The morning that begins with the first ritual of preparing (sometimes) the whole day’s meals and its meandering through a maze of rituals and functions that are tethered to the idea of growing food, more food, day after day.