CAA And The Rage Of Rappers (My Piece In National Herald) 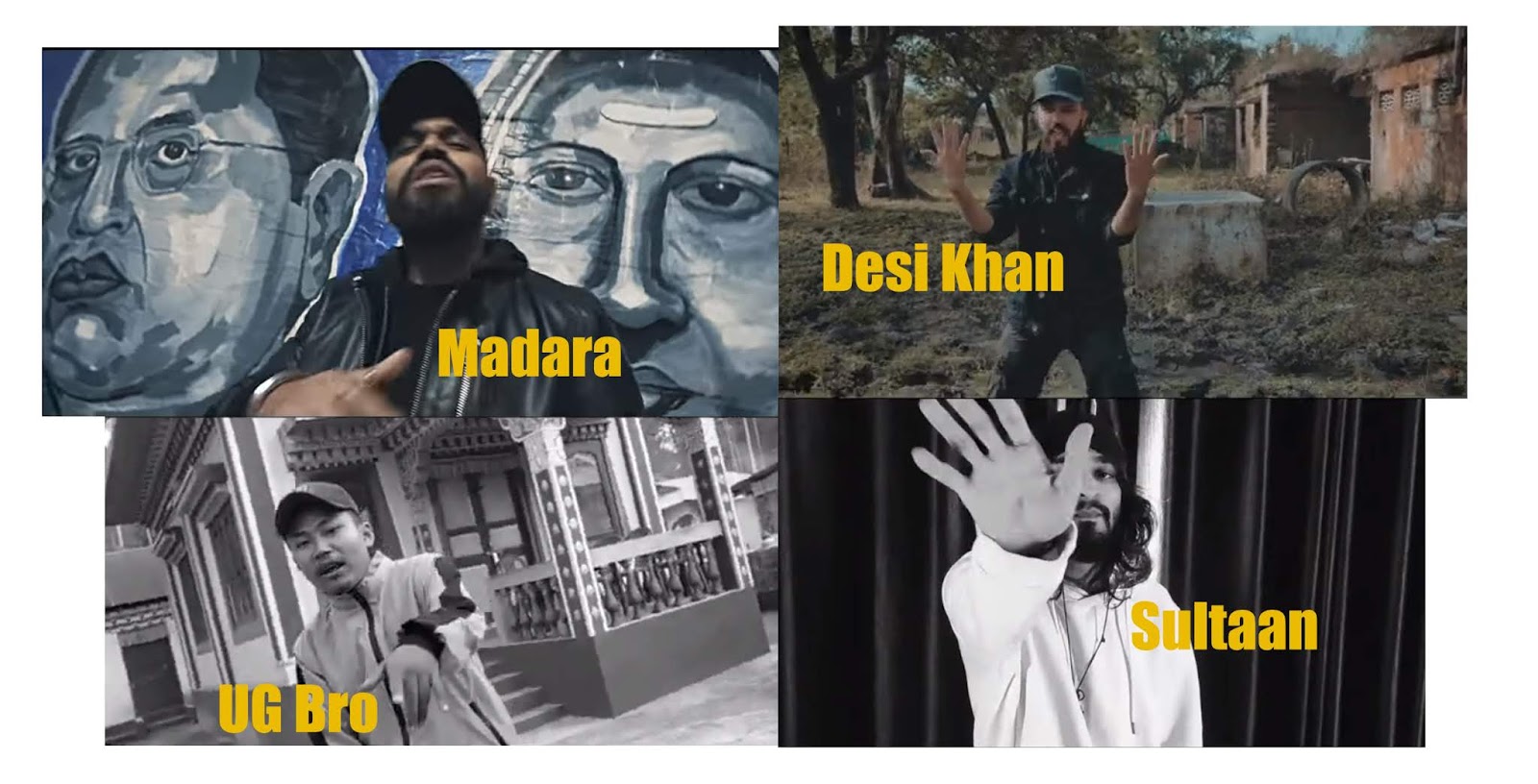 THERE IS NO ART FORM that expresses anger like rap. Which is a good thing. I shudder to think what the world would come to without the safety valve of this form of music. Right now, the country is going through a sort of savage shift, where big fat wedges have been driven into old fault-lines. Many have compared it to the freedom struggle where novel ways of non-cooperation and civil disobedience were being thought of.

Something of that sort is happening today too as students protesting from their campuses across the country are beginning to use rap and hiphop to voice their frustration. The Citizenship Amendment Act came into being as a response to a muddled NRC or National Register of Citizens drive that was carried out in Assam. And it was Assam where the protests erupted first. It’s no coincidence that some of the most blistering rap attacks have come from this part of the country. Van M’s ‘Achhe Din?’ is a case in point. Van M (pronounced venom) who sings in Hindi and Assamese rages against the new law with lines like: ‘Assam aaj jal raha, khoon mera khaul raha, Democracy is dead, Hitler sashan chal raha hai’ (Assam is burning today, it’s making my blood boil, democracy is dead, it’s Hitler rule now). The anger in his voice leaps out at you as he sings: ‘You tell me mother****er how could ’14 be the cut-off jabki court mein ‘71 hai, so you better f*** off’.

In ‘Akhir Kyu?’ Momin Moyal vents his frustration with ‘F*** CAB, f*** NRC’. Then goes on to question the motive behind bringing in such laws. ‘Asli muddon se ho gaye ho bore kya, Parliament mein baith ke karte ho tum roll kya?’ (You have gotten bored with the real issues, what do you roll sitting in Parliament?). Momin also asks why such a smokescreen was required. ‘Bol kyon mujhe lagti teri niyat kharab, bol kyon sadkon pe ana pade ye awam’ (Tell me why I think your intentions are rotten, tell me why people have come out on the streets).

‘Indian Gorkha (Anti NRC)’ is UG Bro’s rap in Nepali where he exposes the fraud the NRC has wreaked on the Nepali-speaking Gorkhas of Assam, many of whom have been excluded from the state NRC. His song talks about the lure of Gorkhaland and Gorkha pride invoked by the BJP during elections and the contrasting results of the NRC in Assam.

Rahul Rajkhowa, another young Assam rapper who is also an alumnus of JNU, hits out at the administration in his song titled ‘The Police?’. Rajkhowa asks: ‘You afraid that you was wrong, so you cracking on people who think different… my city is burning, where the police?’. Clips of the police crackdown at Jamia, goons trashing JNU hostels and rallies across the country are interspersed throughout Rajkhowa’s video. 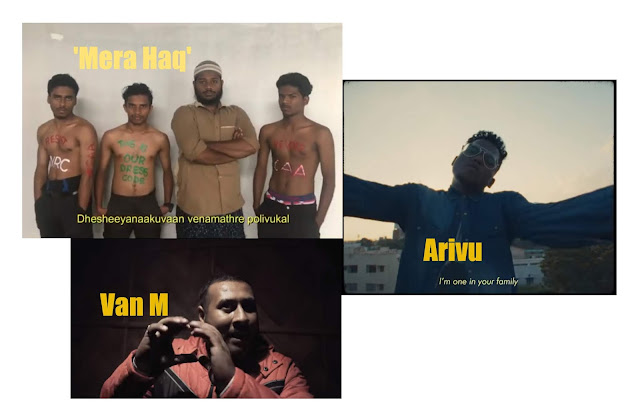 ‘Sarkaari Freeverse’ Sultaan captures the violence in black-and-white with lyrics as stark as his imagery. Sultaan makes poetry about the violence that people have faced since the protests began. ‘Aaj mein dukhi kyonki Bharat mera ro raha, kafan mein lipta tiranga mera so raha hai’ (Am sad because my India is crying, my tricolour is lying dead in a coffin) sings Sultaan. ‘Aise hote achhe din, toh yeh din hamko nai chahiye, ham ko toh chahiye Bhagat Singh jo tum sab mein bilkul nahi hai’ (If these are the good days you promised, then we don’t want good days, we want a Bhagat Singh who’s not there among you).

Social media platforms are replete with clips of protests where students standing at police barricades shun regular sloganeering and take to rap. In one popular clip Rohan Vohra is seen singing ‘Aa jaa baat kar’ as his friends keep the beat with their claps. Vohra’s song questions the morality of those in power and the fact that the government has so far failed to reach out to any of the protesters despite many ‘Man ki Baat’ monologues by the Prime Minister. In his rap Vohra asks: ‘Ram ke naam pe kaam karta hai, phir logon ki muththiyon se kyon darta hai’ (You invoke the name of Ram and yet are scared of our protesting fists) and ‘achhe din aate honge tere sapno mein, mere liye toh saza hai, aa baat kar, mujhse baat kar’ (The good days are only there in your dreams, for me they’re a punishment, come and talk, talk to me).

It is not just North India and the Northeast but protest rap from the South is also making its way in to the digital consciousness. ‘Sanda Seivom’ (Let us Fight) by Arivu seeks to question the government’s intent when he sings in Tamil: ‘This is our earth, CAA is here to divide us’ and ‘all of us are immigrants on this earth, whoever is inciting this war is just a businessman’. ‘Hara hara’ by Haris Saleem of Street Academics calls out the hate embedded in police excesses. His Malayalam rap is also one of the more professionally produced videos. In it Saleem re-enacts stories of custodial excesses that have been officially denied but whose victims are said to run in hundreds.

In ‘Rap da Khel’ Desi Khan, a Punjabi-Hindi rapper, stands outside a derelict housing colony as he makes comparisons with what is happening in India with Israel’s willful occupation of Palestine. Khan sings: ‘Kashmir pe na pura desh bola, yeh maza wohi, yeh saza wohi’ as he compares the Internet lockdown and police action in Delhi and other places to what has been happening in Kashmir.

‘Yeh Tukde Tukde Kaun Hai?’ asks rapper Madara turning the oft-repeated allegation on its head as he sings around what looks like the JNU campus with all its posters and graffiti. Madara pinches with his sarcasm as he sings: ‘Fake degree wale beta tujhko kya padhayenge, banwayenge mandir aur pakode talwayenge’ (What will those with fake degrees teach you, except building temples and frying pakodas).

‘Mera Haq’ by the trio of Shad, Muzii and Faiz make a Malayalam and Hindi rap whose chorus defiantly asks in accented Hindi: ‘Tere baap ka nahi, ye Hindustan, tere baap ka nahi’ (This India does not belong to your father). In ‘Mai Puchta Hu Sawal’ Shan Malik sings: ‘Bate karte the yeh sabke saath aur vikas ki, vaade yaad karke inke khoon khaulta hai’ (They used to talk of everyone together and progress but now their promises make my blood boil). In ‘Pol Khol Rap’ Gabru reminds us of the foundations of democracy as he asks: ‘Loktantra janta ka hai, janta ke liye, janta se hai, ab kahan ka hai aur kahan se hai?’ (Democracy is supposed to be of the people, for the people, by the people but now it’s only about where are you from?) The discriminatory aspects of the new citizenship act are certainly not missed on any of the students who are often accused of having misunderstood it. In his ‘Inquilab Zindabad’ Barzstar begins by asking: ‘Acche din, kya yeh tum ho?’ (Good days, is that you?) To which an authoritarian male voice says: ‘Jaat kya hai balak?’ (What is your caste, child?) when he answers: ‘Musalmaan.” The male voice laughs out loud.

Such is the spirit of the times that Raftaar, a more established and commercial rapper began his live show last month by calling his bodyguard Arshad on stage and proclaiming loudly: “Arshad ko agar koi is desh se nikalne ki baat karega, toh pehle goli main khaunga. (If anyone talks about sending Arshad out of the country, then I would be the first to face the bullet)” A strong message, but then such are the times we’re living in.


Dhiraj Singh is a well-known journalist, writer, TV personality and artist who has shown his abstract paintings and X-Ray works in India and abroad. More about him can be found at www.dhirajsingh.co.in