WHAT CAN BE READ can also be seen. What can be seen can also be felt. What can be felt can also be absented deliberately to let the imagination fill in the gaps. This kind of wizardry comes only to a few artists. My saying this in no way suggests some kind of a natural gift or an inborn genius. In fact, I am pointing to quite the opposite of that, which is rigour and sweat. A certain kind of insatiable appetite not just for materials—new and different—but also for newer ways of reacting to stimulus, both visual as well as conceptual. Unfortunately, this doesn’t happen naturally to most of us. Instead it requires huge amounts of time spent immersed in other art forms: music, dance, literature, science and politics. And of course, the daily news. Anyone who thinks that an artist is only inspired by love and nature is in my opinion a few centuries behind date. Artists today have to constantly keep raising the bar for the way they think and look at the world and in some cases the space beyond it too. 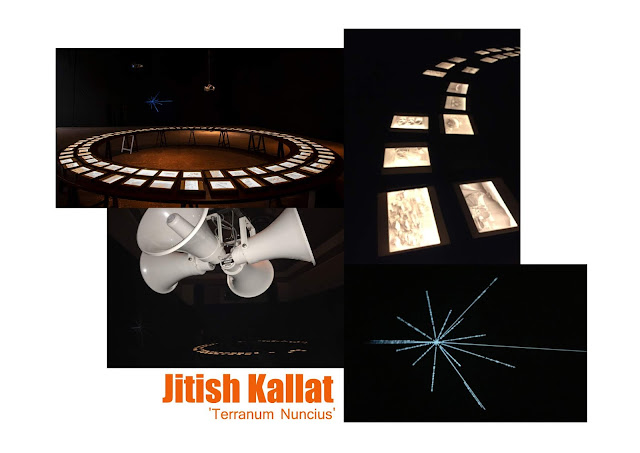 Jitish Kallat’s new work called ‘Terranum Nuncius’ is a good example of this. Though I have to say it could’ve simply been called ‘Covering Letter’ instead of its Latin meaning. But that’s a minor quibble. Through the work Kallat draws us into a dark chamber that is only lit by a circle of light boxes. In another corner is a cluster of loudspeakers. Between these two is what looks like a Star of Bethlehem in reclining position. It’s an odd set-up and you’re left wondering if this is some sort of a self-indulgent artistic ruse to seem larger than life, like a dancing peacock. The images in the lightboxes too are so wildly disconnected that they could be taken from newspapers from five different countries across five different continents. And that is Kallat’s specialty—to leave the viewer so utterly at sea in the vast matrix of his imagination that you have to clutch at straws to make sense of what it is that he’s trying to say. Kallat is not an artist who can be understood without flipping through the pages of his catalogues. 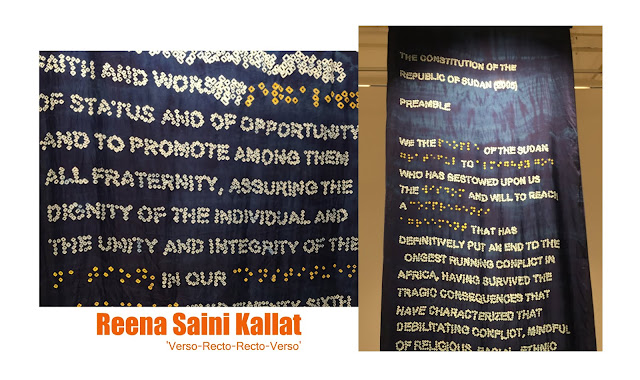 In ‘Terranum Nuncius’ what he has done is decode a letter that we sent out into space on the Voyager some 40 years ago. It is a great thought trying to re-hear and re-see the songs, greetings and images scratched onto the surface of a set of ‘Golden Records’ that the spaceship is carrying. It’s our message to the future out there, where there may exist beings that may or may not want to keep in touch with us. As an idea it taps into something more visceral, more real, like social media’s FOMO—the fear of missing out which is also the fear of being forgotten.

Reena Saini Kallat, Jitish’s wife and fellow artist, brings the notion of collective messaging back on terra firma as she gathers us in an assembly of nations. She shows us covering letters of a different kind—preambles of constitutions of countries that have known division or civil war or a violent break from the past. These preambles she has dyed on to yards of silk in the ‘bandhini’ style of tie-and-dye. She asked traditional ‘bandhej’ dyers from Bhuj to make words instead of patterns. Some common words in these tie-and-dye preambles are scrambled into braille or as unintelligible code words that are so commonly used that they cease to mean much. These are words like PEOPLE, JUSTICE, SOCIETY, EQUALITY and such. In these times of civil unrest where reading the preamble is seen as an act of protest these works are powerful. Not so much in what they’re saying but how each word has been tied and knotted and dyed onto the fabric to make it unremovable.

In the same political vein, Rashid Rana repurposes Rubens’ 15th century work titled ‘Wolf and Fox Hunt’ to stand in as a template of ‘tyre-burnings’. Tyres are routinely burnt in Rana’s native Pakistan to protest against all kinds of acts of omission and commission by the State. In the work ‘Covert Overt’ Rana urges you to experience the fury of a hunt that he has pixelated, not into blurry boxes that hide nudity, violence and individual identities on our TV screens. Instead his boxes are cut sharply and are jumbled up like the squares of a Rubik’s Cube. But Rana’s Rubik’s Cube offers no resolution or even its remote possibility. What he offers though is a way of understanding how delicately power balances between the rulers and the ruled.

This show by Nature Morte gallery is a collateral of this year’s India Art Fair and is on till February 19 at the spanking new Centre for Contemporary Art at Delhi’s Bikaner House.