IN SCHOOL, I REMEMBER IT WAS KABIR who was the easiest among the poets that lived inside our Hindi textbook. There was this directness, this familiar angst in his words that spoke to us like truths spoken by the class back-bencher. Because the backbencher knew stuff. The backbencher saw stuff that even teachers didn’t. Because while the teacher saw everyone’s faces the backbencher saw what went behind the faces. What others did behind the backs of those who sat in front of them. Kabir was a lot like the backbencher. He had perspective that those ahead of him in both age and social status did not.

In the national mourning following Indira Gandhi’s assassination I remember listening to Kumar Gandharva for the first time. He was singing ‘Ud jayega hans akela’ (the swan will fly out alone) on Doordarshan and listening to him I came to realize the immense beauty of Kabir. It was a kind of moment when the earth below your feet shifts. It seemed like a song made just for that exact moment of our lives. But as I was to find out later, it wasn’t. The lines were written some five-six hundred years ago. Since then I’ve been re-acquainted with Kabir at different points in my life. Sometimes knowingly, sometimes unknowingly. Kabir’s is that one singular voice that has spoken to people of the Subcontinent ever since he began to weave his back-bencher ideas into verse. 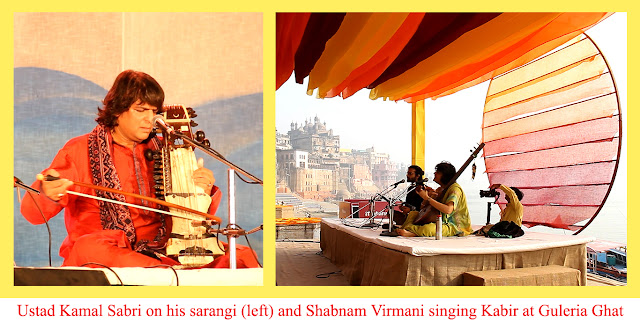 The Mahindra Kabira Festival translates the legend of Kabir into 4D sound and modern stagecraft. Organized at his birthplace, Varanasi, the Festival celebrated its fourth edition this November calling musicians and seekers from places as far removed from the weaver as Czechoslovakia, Egypt, Australia and the United States. It is not an easy festival to pull off, considering Banaras as a city wakes up to a festival every other day—it’s a bit like a Groundhog Day of festivals where you’re caught in a loop of repetitions and more repetitions. Sanjoy K. Roy whose baby the Mahindra Kabira Festival is, was very clear about what he wanted from it. “Kabir represents the rational as opposed to either the spiritual or the religious,” he says, “it is the lack of common sense and the lack of rationality that has perhaps led to the present divisive narrative.”

Shabnam Virmani, whose ‘Kabir Project’ began sometime in the aftermath of the Gujarat riots of 2002, was also one of the performers at the Festival. Shabnam started out as a filmmaker journeying across the Subcontinent to discover how Kabir had been reborn in different places at different points in time. “There was an incredible diversity of Kabirs to encounter. There was Pt. Kumar Gandharva’s Kabir. There were folk forms of Kabir. There was Kabir in the Guru Granth Sahib. There was Kabir who was a champion of Dalit rights.”

It was therefore not surprising to find a reggae Kabir too through singer Pato Banton and his keyboardist Antoinette Rootsdawtah. Pato, a Grammy-nominee, found in Kabir the personification of everything that his music seeks to encapsulate: one love, one God and one human family.

In another avatar Kabir became ‘Dujo Kabir’ or the other Kabir where he’s not a plain-speaking poet-weaver but is simply a weaver who refuses to sell his work to the king. Because his work is not for sale, the state tries to coopt him. When that too fails Dujo Kabir must pay a price. ‘Dujo Kabir’ and ‘Fitrati Chor’ were single-actor plays created by Jashn-e-Qalam around the works of Rajasthan’s folklorist Vijaydan Detha. “It is a reflection of what’s happening now. We want to hark back to some kind of a Ram Rajya which is this golden era but the times we’re living in now is there a space for dissent? Is there a space for the artist?” asks K.C. Shankar one of the actors of Jashn-e-Qalam.

Similar sentiments were echoed by Raman Iyer of the band Neeraj Arya’s Kabir Café: “Kabir wants us to introspect, look within not to project stuff outwards with a tweet and a hashtag like when he says: ‘bura jo dekhan main chala, bura na milya koi…’ (when I went to find evil, I couldn’t find even one).” Formed some six years ago Kabir Café is a band that sets Kabir’s words to modern instruments even though as the band’s founder Neeraj Arya puts it: “Kabir was relevant then and is relevant now.”

There is something about listening to Kabir on the ghats of Banaras. It is almost as if he’s there somewhere hovering above you on a drone reading your thoughts as you’re journeying through the ghats where life is playing out in endless reflections as in a hall of mirrors with the morning snans and evening aartis and the never-ending pyres and the dogs eating sweets offered to the river and the gulls leaping at the bird-seed pilgrims toss in the air and the giant cruise-boats with their international tourists and pilgrims with their phones trained on everything that’s happening around them. And just when you think that this circus of life is getting too much for you, you’re calmed by Kabir, the backbencher, and his deep and abstract logic that says the only journey worth taking is the journey into yourself.