#ArtIsEverywhere : In The Wake Of The Fake (My NDTV-Mojarto Column)

THOSE IN THE MARKET sometimes forget that the goods are a means and not an end. The end is feeling. Of happiness, of satisfaction, or even of keeping-up with the Joneses. In the art world goods and feelings converge in many strange and counter-intuitive ways. A work of art is a work of art only if it makes you feel something, anything. Most of us creating a painting or an object aren’t thinking of how much it will fetch. We are thinking of how to give physical materials the reality of human engagement. So that it speaks to people far, far removed from us and our time. A work of art needn’t always be touchable and feelable. It can also be a virtual idea that stays locked up inside our computers. Yet being that it manages to engage us in ways that are novel and have no recallable precedent. Most people will have trouble wrapping their heads around this, but the fact is that artists are looking at solving deep problems of humanity. And that the act of creating things—paintings, drawings, sculptures, installations—is incidental. 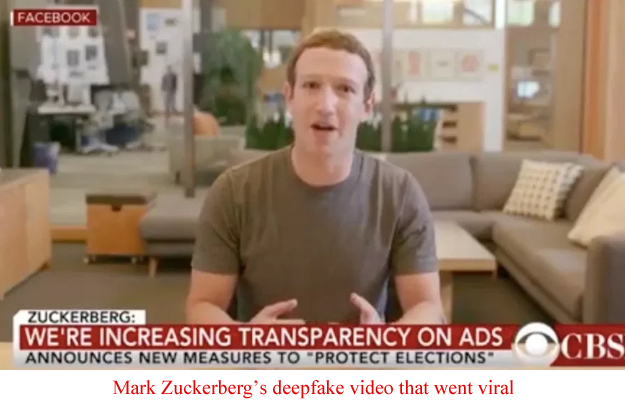 The past couple of months the Internet has been breaking over a work of art. Usually art enters the mainstream of Internet conversations only when auction prices hit a record high. Or an invisible Banksy destroys his own artwork during its auction. This work had none of these qualities. In fact, it was farthest from anything even remotely suspected of being arty. The artist in question is called ‘Bill Posters’. If you Google him, you will come across a flurry of pictures of wall-notices saying, ‘Bill Posters Will Be Prosecuted’. These notices, common in the UK, are aimed at discouraging sly vandals and cheap advertisers from claiming their walls. So, we know that Bill Posters is probably a pseudonym for an artist or a collective of artists who like to indulge in “brandalism” and “subvertising” or in simpler words vandalizing brands and subverting advertising.

The work first appeared on Bill Posters Instagram page as a seemingly innocuous video of Mark Zuckerberg. However what Zuckerberg was saying was anything but innocuous. The video went viral. Even news channels began to show it asking questions that the video implied by its very existence. In the video Zuckerberg is saying: “Imagine this for a second. One man with total control of billions of people’s stolen data, all their secrets, their lives, their futures. I owe it all to Spectre. Spectre showed me that whoever controls the data, controls the future.” Many realized that the video was a ‘deepfake’ or one where the speaker’s face or lip movements or voice have been faked using AI and an actor. In the past there have been deepfakes of others such as Barack Obama where comedian Jordan Peele channels the former US President to holler at the current saying: “President Trump is a total and complete dipshit!”. Or another where Hillary Clinton impersonator Kate McKinnon makes her weep. Yet the Zuckerberg video addresses the most important issue of our time. Data and the ability to shamelessly profit from it. The video poetizes the phenomenon by making the one person around whom this whole debate has raged for years its main protagonist. I think that in itself is an act of boldness, wit and artifice worth applauding because it required a fresh way of thinking and looking at a pretty scrambled debate. 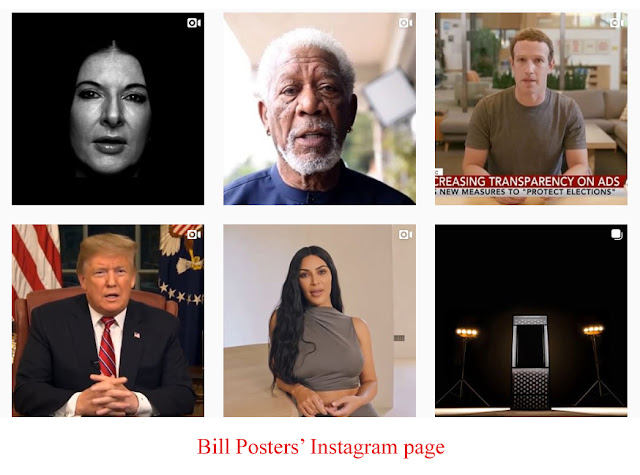 In a later video Bill makes Zuckerberg own up another fact that everyone knows or suspects about Facebook. “I wish I could tell you that our mission in life was just connecting people but it isn’t,” says he, “We just want to predict your future behaviours. Spectre showed me how to manipulate you into sharing intimate data about yourself and all those you love for free. The more you express yourself the more we own you.” That line for me is the biggest question of our times. How much of ourselves should we cede to this giant monster that grows stronger every day as we feed bits of ourselves to it.

The ‘Spectre’ that many of Bill Posters videos refer to is also a very intelligent ruse. It’s an “immersive installation” that he and fellow artist Daniel Howe created for a show at Sheffield, England, but it is more than that. It’s a metaphor for all that is wrong with us today. The name ‘Spectre’ is founded on Dr Aleksandr Kogan a.k.a. Dr Aleksandr Spectre, the data scientist who profited by selling 87 million Facebook profiles to Cambridge Analytica, which then used them commercially to target voters in political campaigns including those in India. 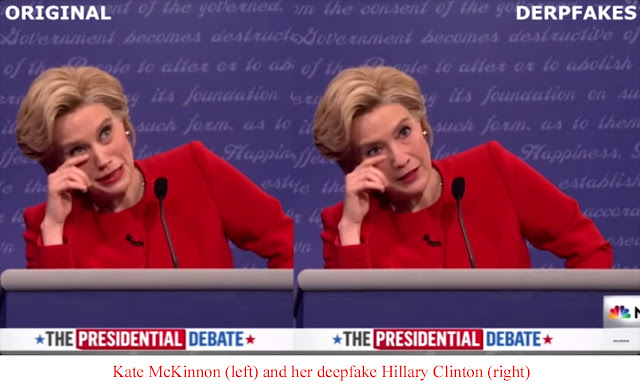 Bill Posters has used deepfake to vent collective ire and frustration over being used as data-fodder by big corporations. On Posters’ Instagram page there is another where Kim Kardashian is saying: “I genuinely love the process of manipulating people online for money.” Another of Trump saying: “It’s all about two things: algorithms and data, I pulled off the biggest heist of the century and people just have no idea.” There is of course a larger moral takeaway from this online art project. That artists must address complicated issues of our times in the best they way can: as problem solvers.

Article link on NDTV-Mojarto is HERE