ART IS A BIT LIKE GOD. People only feel its presence inside a gallery or an event especially designated as an art event. Sadly, art is not seen and felt everywhere as it should be. It is only a small minority like the mystics of yore who can feel the presence of art everywhere. As a writer and an artist, I strongly feel about the enormous number of binaries that we Indians carry around our heads. And on top of that is our purity-fetish. For us, things have to be clearly defined and refined before they can be aesthetically enjoyed. Right from school we are taught that there is art and there is science and the twain meet only in movies and nowadays in Apple devices.

It was with a view to deflate this rather pompous balloon that we devised a formula to take art into the heart of what has today become the hub of social life. Some months back we approached Mahim Singh, the operations head of Noida’s Gardens Galleria mall, to start an artist chat series. We chose Noida because it’s usually a distant third in the NCR arts calendar. Initially skeptical, Mahim later saw value in our desire to start a dialogue at a space where people came with the singular purpose of shopping and hanging out. Let’s surprise them, we told him, and give them something they’re not expecting. Since I am also a co-founder, along with Sahar Zaman, of Hunar TV, a web channel whose aim is to make arts more accessible we decided to call the series ‘Hunar Charcha’. 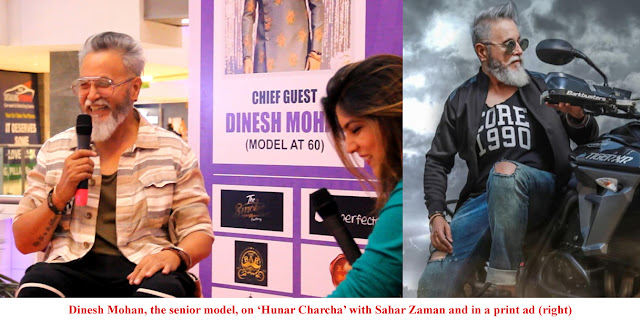 We gave the mall a list of artists, musicians, singers, writers and a host of other performers whose practice fell in the in-between, undefinable space. Soon the idea began to roll on its own momentum. And thus began an exciting journey of taking art everywhere, literally. Our first Hunar Charcha was with a unique breakthrough artist who is unlike anyone in India. We got a ‘senior model’ to begin our ‘artist chat in a mall’ series. Dinesh Mohan is 60 years old and is a rage on ramp shows and TV commercials. He is tall and well-built with a fashionable shock of grey on his head and his face. But that is not all. Dinesh is also the story of contemporary India coming to terms with an ageing population. “I get trolled and age-shamed for doing what am doing,” Mohan told a rapt audience in the mall. His personal life has been a roller-coaster. His was two-decade old battle with crippling depression and obesity till he came to a point where he decided to will himself back to life. 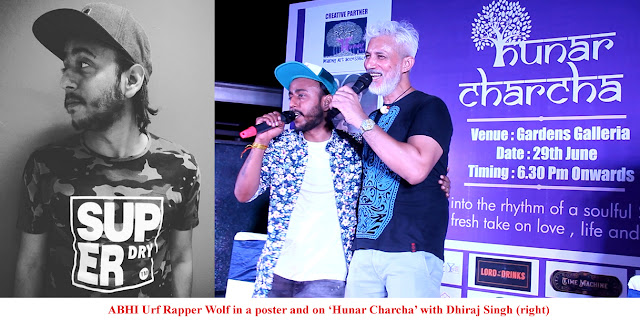 The art world sometimes tends to get very dense and hifalutin for people struggling to make a living in the city. I have sat through endless lectures and harangues from art world worthies who’d like to believe that the public is only drawn to random sentimentalia. That may have been the case a decade or so ago but now things are different. All it takes for a smart phone user is to take out his phone and Google what it is that he’s seeing in front of him. And if he likes what he’s seeing, it’s going to be there in his camera roll and his social media soon enough. The idea was also to make this encounter with art an offline, real-time one. And we couldn’t have chosen better. Dinesh is also an actor who had a small role in ‘Bharat’ and has a bigger one in the upcoming Anurag Kashyap production ‘Saand Ki Aankh’. By the end of his Hunar Charcha Dinesh had created a spontaneous fan-club right in the middle of a busy mall.

Our second artist in the series was a young, upcoming desi-rapper who raps about some really edgy challenges of urban India. His song called ‘Band Kamraa’ speaks about the closeted life of LGBTQ kids. The song sensitively portrays the inner anguish and sometimes physical violence faced by LGBTQ boys and girls especially from their families. ABHI Urf Rapper Wolf is a radio jockey by the day but when he’s free and has the mind-space, he likes to wander off to do some creative heavy-lifting. The idea behind these talks is also to acquaint shoppers and mallrats with the inner life of artists. It is an effort to stop people from becoming mere consumers of art but also real enjoyers and partakers of it. And people do come back to the artists to say how inspired they are by their stories and performances. 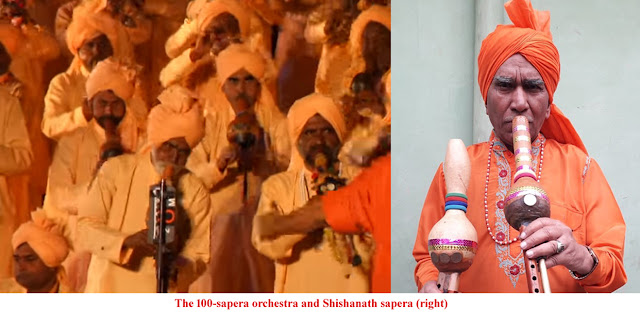 Our next episode will feature Shishanath Sapera whom I first heard way back in 2007 at Central Park in Connaught Place. It was the first-ever sapera orchestra that I’d heard. And I was blown away by the haunting quality of their music that came from 100 ‘beens’. They played ‘Auld Lang Syne’ and ‘Amazing Grace’ with such remarkable finesse that everyone sat transfixed. Shishanath and other saperas like him have been left without a livelihood when in the late 1990s a change in the Wildlife Protection Act brought an end to their traditional snake-keeping. Today many saperas have left their family vocation and switched to small jobs. Shishanath is now in his sixties and am much looking forward to his first performance in a mall.