THERE IS NO PLACE IN INDIA that epitomises tragedy better than Awadh. On the map it is a largish region roughly the size of Portugal that contains Lucknow and Ayodhya. Many wouldn’t know this but the name ‘Awadh’ or ‘Oudh’ as the British referred to it is a corruption of Ayodhya which on its own means ‘not to be messed with’. The Awadhi way of life is often referred to as the ‘Ganga-Jamuni tehzeeb’, a phrase that artfully captures a confluence culture in which many binaries dissolve and stand-out like wavelets in a river. The tragedy though is that the glorious culture of Awadh is fast turning sepia with neglect and apathy. Just then comes along a festival that stalls the sepia-fication and shines a bright spot of light on the arts of Awadh. 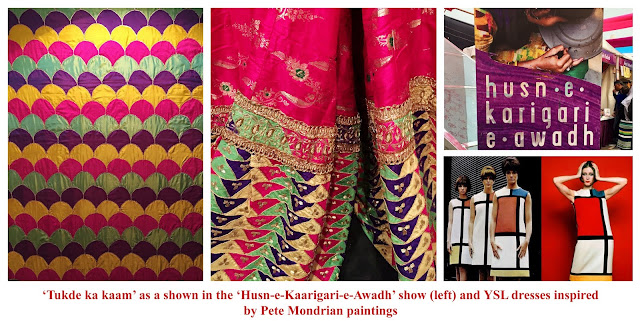 The Mahindra Sanatkada Lucknow Festival is like a sparkling aurora in the middle of a decaying city of high culture. Though the Festival isn’t new, this year it was special because it completed 10 successful years. One of the highlights of this special edition was a fascinating exhibition on the arts of Awadh titled ‘Husn-e-Karigari-e-Awadh’. I must point out here that ‘husn’ or beauty isn’t usually used in the context of art, which is baffling but then Urdu is a pretty baffling language whose euphemisms can make even hell sound like the most beautiful place on earth. Located in the never-before-opened ‘taykhana’ or basement of the Safed Baradari the exhibition showcased the leisurely arts of Awadh such as ‘tukde ka kaam’. The fascinating aspect of the tukde patchwork is that it involves embroidery but only in the form of minimal outlining. The mainstay is of course the pixels or ‘tukde’ of colour that create the finest geometric abstractions. The fact that this piece of art is worn by women as ghararas and shoes and bags put it ahead of Yves Saint Laurent’s ‘Mondrian dresses’ that came at least two centuries later. Another kind of Awadhi specialty is the ‘metal embroidery’ or ‘Kaamdani’ in which thin metal pieces are clawed into cloth to create intricate patterns and motifs.

Chikan embroidery in comparison is not a dying art yet the show introduced us with its finer versions that one doesn’t often get to see. The beauty of Chikankari is that it creates an illusion where the cloth becomes an almost gossamer web in which the designs float as if in a surrealist’s dream. It is indeed worthwhile to dwell upon the idea of Awadh’s renaissance that was underway for a good 100-odd years in the relative peace of the Doab region. Until the British East India Company decided to gobble it up in 1856 under the extremely devious Doctrine of Lapse.

About 160 km from Lucknow is Kotwara which is the ancestral home of Muzaffar Ali. A former talukdar Ali captured this last phase of ‘Awadhiana’ most evocatively in his ‘Umrao Jaan’, a film based on Mirza Hadi Ruswa’s novel about a courtesan by the same name. Ali’s Kotwara estate is today like a set from his film complete with fountains, ‘jhaad-phanoos’ chandeliers, gilded mirrors and four-poster beds. The only thing out of place is a Mercedes-Benz from Amitabh Bachchan’s ‘Don’ that’s parked out in the garden.

Not too far from Kotwara in the same Lakhimpur-Kheri district is a ‘Frog Temple’ that on first mention conjures up visions of a Ninja Turtle or a Kungfu Panda but up close it is breathtaking if slightly incongruous hidden as it is in a maze of bylanes. It is a uniquely crafted temple on whose front entrance is perched a giant brick-and-mortar frog. It seems as if the temple is being pulled by the frog. Pradiyumn Narain Dutta Singh whose ancestors built the temple points out that when viewed from the top the temple is actually a ‘yantra’ or a four-sided sacred diagram meant to ensure fertility of its patrons. The temple sure is quixotic in both idea and actual architecture but then that is Awadh for you.

Beneath the quirkiness of its gentry the area had also learnt to live very close to nature. The terai forests of Lakhimpur Kheri provided an amazing variety of native and exotic species of birds and animals including the tiger. Though now most of the former landed talukdars have hung their guns, some have even graduated to opening up their hunting lodges for travellers like me. One such place is Oel Nature Retreat that’s nestled in between swathes of sugarcane and wheat fields and a picturesque pond. Though fitted with modern comforts the place is replete with crafts from the region such as bamboo furniture and Chikan furnishings.

The makers of many of Awadh’s exquisite crafts often live in small, nondescript houses in small towns but their imagination lets them fly to the skies and beyond. And it shows in the things they make like the fancy repousse naqqashi ‘paandans’, spittoons and hukkah stands which are remarkable in their ingenuity. I had the opportunity to witness the making of ‘phool’ metal pots that are still used to cook. As an artist I was hugely fascinated by watching pots emerge from moulds made of sand and molasses, a process that is as old as Awadh itself.

Dhiraj Singh is a well-known journalist, writer, TV personality and artist who has shown his abstract paintings and X-Ray works in India and abroad.