Somewhere in the spleen of Karachi is a moss pond. It is populated by a bask of creatures that one only sees in zoos and sanctuaries and of course on Natgeo and Discovery. But here this creature is the object of much veneration and supplication. This is most surprising to see in a country that is as far from animistic thinking as George Bush is from books without pictures. Yet the place is amply visited by devotees and curiosity-seekers, like myself, who’re keen to find what lies in the depths of this goldfish bowl. Mungo Pir is a dargah that is reached after driving through the poorer parts of Karachi. The parts where the roads are more gravel and dust than asphalt; where repair shops far outnumber those that sell new things. These parts are in fact the very anathema of the sea-facing Clifton from where we’re coming.

From the outside, Mungo Pir looks no different from any other dargah, fronted as it is by kiosks of red-rose garlands and incense sticks and gold-silver embroidered dust-sheets. This changes when you enter the pond area. For one, there is the stink of rotting flesh. Then, there are the flies that are drawn to the flesh. Hovering further above are the birds of prey waiting to swoop down on the feast below.

The pond area is split into what looks like a wrestling pit and the actual walled-in pond. The mud in the wrestling pit is marked by the slithering motion of long scaly tails. They look like tyre marks but one where the driver’s clearly lost control. The pond is green from moss and weeds. There are the occasional scraps of putrefying leftover flesh. Amid all this unholy squalor float the fat and scaly backs of Mungo Pir’s crocodiles. A big fat one is lolling in a sort of canopy in the wrestling pit. A fearless cat tiptoes around him to take her share from a large leg of lamb as he looks upon it indifferently. We have bought him this piece and we’re in danger of our prayers going unanswered as he shows no interest in it. But the handler tells us not to worry as he casually opens the big one’s mouth as if it were a car trunk and chucks the leg in it. 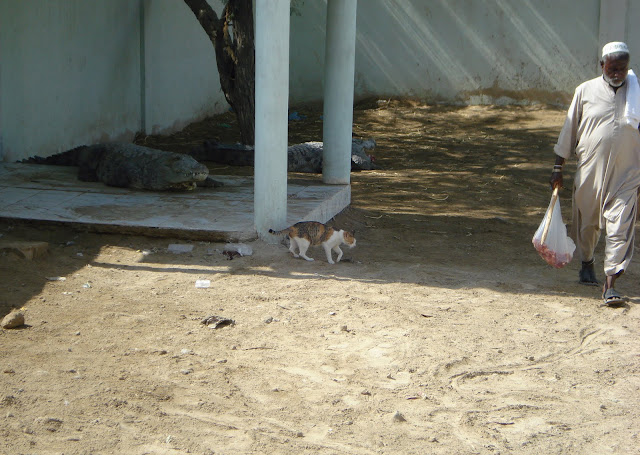 The handler tells us these are pirs or saints who were turned into crocs. That is why keeping them happy is important. The explanation hits me as outstanding. It also makes me realise a very significant aspect of humanity: that as a species we aren’t very different from other so-called lower animals whose natal instincts we use to ‘domesticate’ them. Animals whom we’ve reared in captivity generation after generation till they’ve become absolutely useless to fend for themselves in the wild. In Mungo Pir however the crocs seem to have the upper hand. They have, perhaps psychically, convinced the humans that they’d be safer both here and in the afterlife if they cared and provided for them. And thus generation after generation of Mungo Pir handlers serve and protect these croc-saints as they dwell upon the nature of the Universe and man’s place in it.
Email Post
Labels: Pakistan Travels