A Wall's No Guarantee 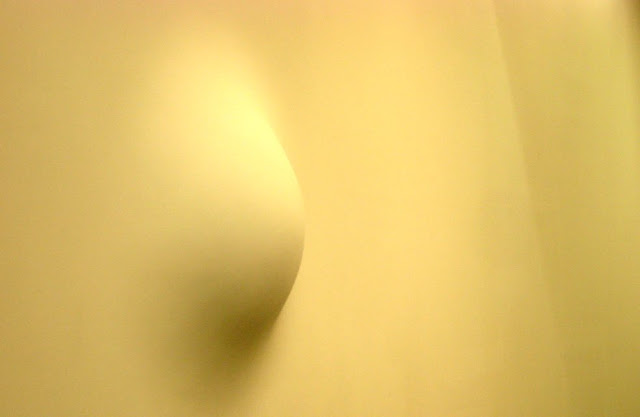 Above: ‘When I am Pregnant’ by Anish Kapoor (detail)
In this dream I am inside an old building with naked brick walls. Something like the Residency in Lucknow. Maybe, it is the Residency, a place to which I feel deeply connected. The room I am in is bare but for a gaping hole fire-place and a bed on which I am lying. I am staring at the wall in front of me. Then slowly from the wall starts emerging a form, a humanoid form, as if someone is trying to enter through the wall. This human form comes out of the wall and stands before me. I am startled by the intrusion but say nothing. Then as if on cue others also start to breach the old wall and come into the room. Some walk through it while others fall out of the wall from different heights. They start to gather around me, not menacingly but in a quiet shuffling way. These are people, men and women, who’re looking at me with sad, pleading eyes and anguished faces. Some of them are also weeping. They’re trying to tell me something. They’re not speaking to me directly but somehow telepathically conveying to me a visceral sadness. Who are these people, I am wondering. And what is this place? Why are they telling me their stuff? Maybe, they’re victims of an act of mass elimination, I reason. But there's no telling what event has caused them to occupy the walls. My heart is beating very fast. I am terrified not so much by the scene before me but by the vague sense of tragedy that seems to connect these people to me. Have I entered some kind of a traffic post of journeying souls? I begin to think. And am I supposed to be a traffic cop here? I wake up feeling heavy and distressed as if I am carrying a huge psychic load on my chest. It feels like the wall people have embedded their stories into me. Stories that aren’t really told or shown but are conveyed, in essence. Like old and hard memories that stay with us as ‘feelings’, not in the original but in some isotopic form. Like a heap of black coal that is pressed and fused to form a clear and prismatic stone.
Email Post
Labels: Dreams Ghost