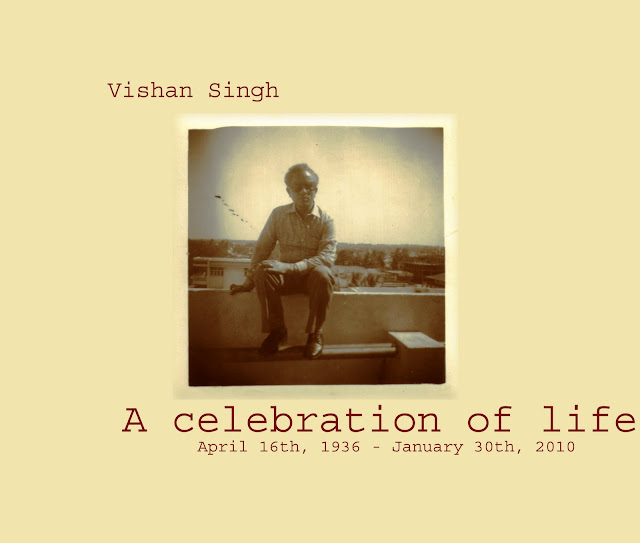 I believe we're most alive when we die... that's when we're liberated from the dragging weight of the body. On dying we become free and weightless as the sky. And like the sky we are given the gift of being present at many places at the same time.

I was in Sydney, Australia, when I received the news of my father's death in Lucknow. Just before he breathed his last he had given my mother extensive instructions about his funeral arrangements: how the family was not to be informed till it was a decent enough hour (he died at 4 am), how he didn't want his last rites to be delayed because of our (my brother's and my) arrival from two corners of the earth (my brother lives in the US). He died after telling my mother how much he loved her and how he was lucky to be going before her because he could not bear the idea of living without her. They had been married for 47 years.

In one of Roger Foley's interviews with Peggy Patrick, an aboriginal law woman, she tells of how her ancestors roamed the earth after they had been poisoned by their white 'owners'. She tells of another story where another white fisherman gives some fish to these dead ancestors and when he turns around he finds them gone. These ancestors then appear to their sons and tell them how they were murdered by the white men for stealing their cow. Peggy says how the dazed and surprised ancestors roamed the earth till they realised that they were really dead. They did not want revenge on the white man, they just wanted to pass on their stories to their descendents. Peggy Patrick's father was one of the men killed. Only her young uncle survived because he didn't eat the poisoned broth prepared by the white men of the village. He also escaped their shooting when they realised that he was not falling over like the rest who had had the broth.

I saw my father again five days after he'd died. We were at a hotel in Mumbai and I was there to see him off. He was taking a sea trip across to somewhere because his health didn't permit him to take the plane. Pa said he'd been very ill the night before but he had "survived" the night and was ready to take on the long voyage ahead of him...

Today we had a memorial service for Pa. We called it 'A Celebration of Life' and it was truly a celebration of what he'd meant to all three of us children, his wife and to his larger family that was really the whole wide world.

This one's for you, Pa. Have a great trip!
Email Post
Labels: Australia Dreams Lucknow