The Problem With Pakistan 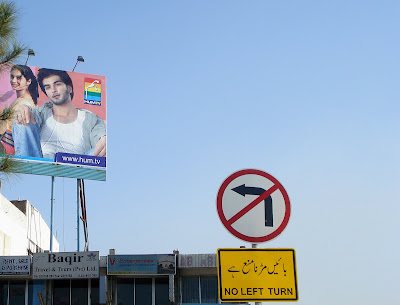 ‘Islamabad is an hour’s drive from Pakistan.’

This local koan begins to make sense as you prepare to enter the ICT or the Islamabad Capital Territory. It is a bit like entering the First World from a Third World country by road. The check-posts, the armed guards, the four-lane highway that fits into the triangular city like a shaft in an arrowhead, everything fills you with a sense of anticipation, the kind poor immigrants might feel for a land of opportunity.

From the check-post you can see the humungous petal-like arches of the National Monument. Shining like a giant flower or a three-headed obelisk announcing your arrival. Telling you that you’ve arrived somewhere foreign… somewhere not quite Pakistan. The ICT is nothing like any other city in the country. In fact many of its proud residents compare it to ‘DC’ minus the Potomac. About an hour’s drive away, on the other end of the arrow is Rawalpindi or Pindi as it is commonly known. Pindi is what Islamabad isn’t. The real McCoy.

The capital of Pakistan is a built-from-scratch metropolis. It’s also a state of mind especially among the rich and the powerful. Almost like as a nagging feeling that they have on their hands a state that is at best a mosaic of differences and at worst, not a state at all. And the fear is not unfounded. It’s like a test-tube of oil and water where one settles on top of the other no matter how much they are shaken or stirred. Islamabad is the oil on top the water.

Power cuts in the country range anywhere between 8 hours to half a day. Near Gujranwala we’re faced with a chakka-jam or road demonstration, people burning their electricity bills. Bills that sought to overcharge them for power not delivered. Essential commodity prices are so high that even flour for the daily bread is sold in the black market. Many farmers even in the ultra-fertile Punjab province have not seen a good crop in years. The journey from Wagah to Lahore on the Samjhauta Express shows the striking contrast between the condition of farmers in the two Punjabs. Where the Indian Punjab has swank car showrooms spread across it like confetti, the other side has its enclaves of squalor.

One thing that Islamabad doesn’t lack is space. It has a green cover far exceeding its built-up area. It has landscaped gardens, awesomely laid out residential blocks, fancy markaz’s or shopping plazas, lavish bungalows many of whose owners live outside the ICT or even outside Pakistan. These are just-in-case residences and they have an ambassadorial function being as they are inside the nucleus of the nation. You need a presence in the Capital, especially if you have business interests to take care of.

“That is the government employees’ colony,” a friend points out a set of run-down high rises. These are probably the worst kept of Islamabad’s buildings. They look comfortable if not architecturally superior, like the rest of the city. The city even has digital speed monitors. So if your speedometer is non-functional you can look up to see if you’re over-speeding and subsequently get a ticket from a cop who catches up with you like lightening.

There are road signs in Urdu and English. There is also freedom to spray them with paint. One says: ‘Bye Bye Israel’, another with a pair of breasts, a less cryptic, ‘Fuck you’. For those who can read Urdu the writing on the wall is more disturbing because there are places where you can find invitations to the Taliban to take over the Federal Capital.

It is as if the members of the republic don’t any more have confidence in their government. As if there’s been a serious conspiracy to unmake Pakistan. They may routinely blame India’s RAW or the CIA but there’s enough evidence that the Pakistani elite have not held back their own contributions in screwing up their country. I think L.K. Advani must have felt it too when he spoke about Jinnah’s vision for a different sort of Pakistan than what stands today in its names. Wasn’t the country meant to be a refuge for the pure? A new and pure Holy Land extracted from the contaminated ore of Hindustan. A new Holy Land whose brave new Capital would have the singular distinction of being called Islamabad or the City of Islam.

A lot of Islam’s high ideals are based on issues of social justice and equity that outlaw anything that compromises a Muslim’s claim to a good life. That’s why canonical Islam had outlawed usury, gambling and wasteful expenditure on wine, women and song. This codification has been very essential to the Islamic worldview… ensuring that the larger congregation or ummah is safeguarded against injustice both within and without. But the problem with Pakistan doesn’t lie there. It lies rather in the way the Islamic worldview has been translated here. For a country that was formed on the assumption that the ummah couldn’t find safety and security among non-Muslims, the problem now has become a race to find ‘non-Muslims’ within the ummah, or in the Orwellian sense a race to find those ‘less equal’.

In conversations over chai cups one often comes across references to the ‘air-conditioned Begums of Islamabad’. It is not supposed to be a flattering description but alludes to all that is privileged, all that is insular. Outside, a harsh race is on. To prove whose blood boils more at the atrocities committed on the ummah by the non-Muslims, in India, in Afghanistan or in Iraq. For those who don’t have access to YouTube it’s easy to get a CD on this sort of propaganda. It’s funny how the new connectivity is being used to fight old wars.

Though generally speaking Islam’s empowerment of the individual makes every Muslim duty-bound to fulfill the five cardinal pillars of Islam, it also implies that every Muslim stand up, physically if need be, against injustice. This in itself is not a bad thing… until it begins to overwhelm the individual. Giving him the right to play judge, jury and hangman whenever he perceives a threat. And perceptions by themselves, as our long and tired history of prejudices has proved, are often not the best judge of things.

The road to the Islamabad Marriott has been cordoned off after a truck loaded with explosives killed at least 54 people and injured another 260 on September 20 last year. The truck had over 600 kg of RDX. I am there exactly a month later and of course I don’t get to see the Marriott. A former federal minister who was visiting his daughter in Islamabad remembers hearing the windows of his daughter’s house opposite the hotel explode with the impact. “I could have died if I was outside… hit by shrapnel or something,” he says.

Geographically Islamabad lies inside a horse-shoe of hills. From here Murree and Nathiagali, the country’s best known hill stations, are only a few hours drive. A lot of Pakistan’s rich have their summer houses in these hill resorts. A ship-shaped restaurant at the top of the nearby Margalla Hill provides the best view of Islamabad. From the main deck of the restaurant the ICT twinkles below like a facsimile of the night sky. It could be Rome with Faisal Mosque as its Piazza Venezia. The best thing about the journey from Islamabad to the top of Margalla Hill is the road. It looks as if it was just laid yesterday. Margalla Hill also has a national park, which perhaps has as many animals as it has Pakistan Rangers on guard duty.

“The problem with Pakistan”, as everyone from a chaiwalla to a high-serving bureaucrat will tell you “is not that we are not smart enough, or rich enough… the problem (in a low voice) is the Army”. The problem with Pakistan is at the moment a silent one. There is growing anger against a section of Pakistan that is considered inauthentic by the majority. This is the foreign-returned, English-speaking Pakistan, a minority that has in a way made a Faustian bargain with the West.

Mohammed Zeeshan grew up in rural Sindh. Growing up he was fascinated by the colour and speed of moving pictures. Born poor but full of prodigious talent Zeeshan had little choice but to become a sign painter while still in school. He was later recruited by an ustad who painted movie posters. The apprenticeship involved censoring foreign skin-flick posters with black paint. This is where Zeeshan learnt the art of subterfuge or hiding that which is unpalatable. Today his graphic nude miniatures sell abroad for lakhs of rupees. His art for the local market is more ‘covered’. But the early days taught him what no art school could. “It was an intense time of study for me… I was not yet old enough to be watching these films that played in the morning shows… I didn’t even understand the pornography in it… for me it was just an image on to which I was expected to carefully add layers of my own interpretation,” says he. Much of those early days imagery survive in Zeeshan’s art today.

But Zeeshan’s an exception. Most others like him buy into the extremist propaganda. It is easy to demonise the rich and blame them for every thing that’s not right with Pakistan. Not every kid gets to make art, use his imagination and make money. For most growing up outside the big cities art and music and poetry take on the shape of a beast. A beast that is fascinating as it is terrible. That’s also why the country is a hotbed for many underground groups and subcultures.

On the other side there is anger too. Anger of the rich whose art and culture stands imperiled by the designs of ‘the mullah element’. At one fashionable soiree in Lahore, someone even provides a solution to the ‘fundoo’ problem. “Nuke the fuckers,” he says between sips of boot-legged Bordeaux. Another friend while driving me around the old city almost runs over a bearded man, “I hate these bloody mullahs,” he says.

But the problem in Pakistan isn’t just its fundoos. But a missing middleclass, a clover-leaf bridge that brings the poor on to the same highway as the rich. The tragedy however is that now it’s just too late to start building that bridge.