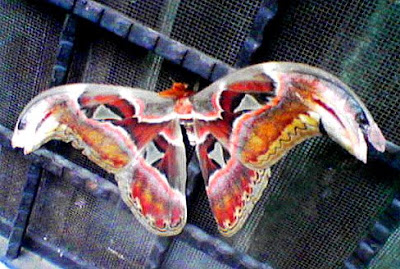 This gorgeous creature I found hanging on to my window mesh in Shivpuri one morning. At first I thought it was a kite (it was that big), then thought maybe someone's pulling a fast one on me... with a rubber toy. So I reached out to yank it off the window and it beat its wings a wee bit. And I realised, I was being paid a visit by some kind of a giant. Immediately I brought out my mobile and captured it in it. Later on when I showed the picture to some nature watchers, I was told that this creature's called an Atlas Moth and it is the largest of its species.
Email Post