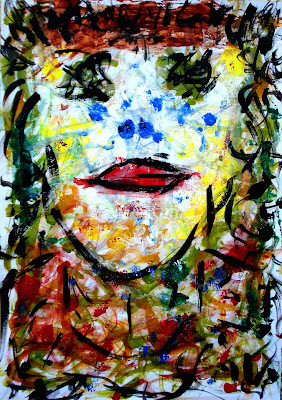 Acrylic on A4 paper
The most thrilling thing about Christhood is also the most misunderstood. We often fail to understand that it is a principle... a messianic idea that has since time immemorial had many claimants; more men than women. Messianism also has implicit within it the idea of changing the status quo... finding a new way... a new religion... and in that Nefertiti (more than her husband Akhenaten) made quite a mark, not just in ancient Egypt but in the entire history of the world. Their religion of a unified single God (Aten or the light of the Sun) is either as old as Judaic monotheism or is clearly its predecessor. This was a remarkable idea because everywhere in their contemporary world there were still pantheons of gods that ruled different aspects of life and death. Not suprisingly both Nefertiti and Akhenaten suffered the fate of heretics, not in their lifetimes though because they were monarchs but posthumously. This is often the fate and price of Christhood.
This one’s my tribute to Willem de Kooning, a stalwart of Abstract Expressionism, a movement that I dig… almost as much I do Nefertiti.
Email Post