This is Pakistan’s Sistine Chapel, more commonly known as Karachi's Frere Hall. It’s an old colonial church that now has the misfortune of standing within sighing distance of the American consulate. This makes stopping your vehicle in its vicinity and trying to capture the building in your camera a security risk. Thankfully, this idiotic injunction is routinely flouted (evidenced by the photographs).

Frere Hall also houses the largest work of Pakistan’s best-known artist Sadequain a.k.a. Sadequain Naqqash, so named for the filigree-like intricacy that he developed as his style. Frere Hall's ceiling was given to Sadequain to use as a canvas... but an untimely retreat from this world stopped the project midway. As I see it this was a blessing in disguise because visually the vacuum of the unfinished half of the work balances the sizzling otherworldiness of the finished half. 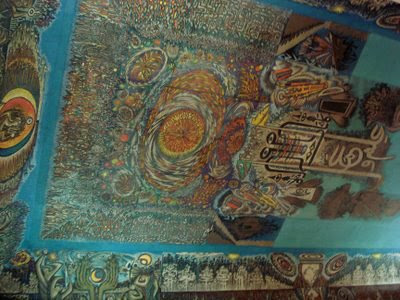 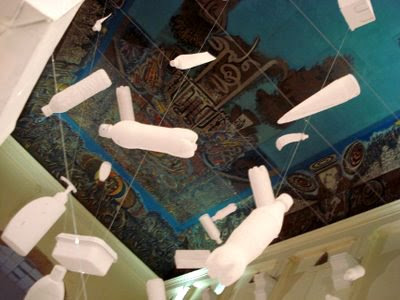 In the month that Sahar and I spent in Pakistan we had the privilege of visiting galleries and private collections where 'a Sadequain' or 'Sadequains' were held up as trophy-rocks from an alien galaxy... you're proud to have them but don't quite know what to make of them. And that is precisely the beauty of Sadequain. He leaves you baffled and confused. It's almost as if his strokes have the power to enter your head and disturb you. At the National Art Gallery in Islamabad where 46 Sadequains were on display we distinctly remember coming out with a headache.

Such a subliminal power is often associated with the written word and not the (thousand) words of a picture but Sadequain (also a notable versifier and calligrapher) manages to blur the boundaries between the two.