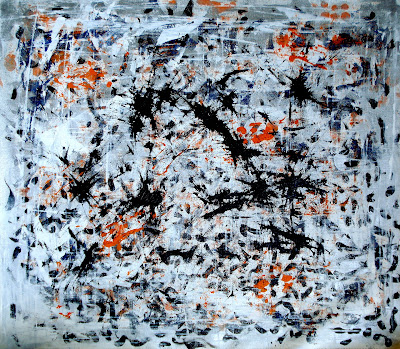 86 cm X 76 cm
acrylic on canvas
On the outer edge of our Universe is a Great White that prowls its dark waters looking for the stray planet or planetoid that's spinning out of its orbit around the Sun. Like the Great Bear the Great White is also a constellation, a formation of stars that the people of the planet from where it is visible have so named even though their planet has no sharks, no seas, no water. They have named it from memory, a flash that they have of their Earth days when they hunted sharks from a small Alaskan archipelago that was wiped off the face of the Earth in a tsunami.
This is the story of souls that spend lifetimes on each planet, dying on one and being born again on another, progressing out, away from the Sun until they slip into the dark waters and are born in another universe, another planet, as another order of beings.
Email Post
Labels: Fish