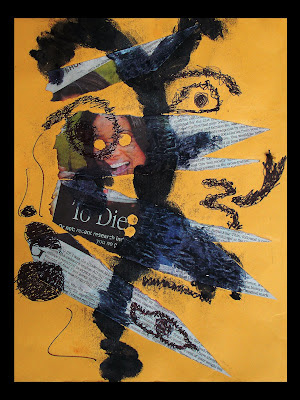 Collage: newspaper, ink, shoe polish on A4 envelope
I was going through a weekend newspaper supplement when a page stood out and began to make faces at me. So I took my cigarette and made holes where its eyes were. But the blind page still didn't stop mocking me. So I tore it out. Burnt its edges. And made a mohawk out of its head. All this, I thought, would teach the page a lesson. But it didn't. It flapped its mohawk at me in a way that can only be described as obscene. I then got some glue and stuck it on an envelope. Like a stamp shaved and serving a jail sentence. Now I wanted to make faces at the page. So I drew and drew and drew... over the stamp, on the envelope... I drew like a maniac stopping only when I had two half faces and a quarter. And then I took some shoe polish and blackened them further.
No page was ever going to mock me again.
Email Post