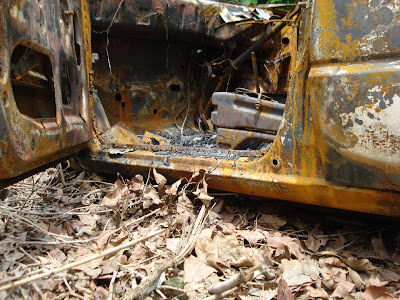 This car outside Parwana, my apartment block, caught fire some days ago. Luckily all those in it came out before the fire spread, which probably explains the broken windscreen and windows. You can't make out what colour it was before the fire, because all of it has evapourated. The mustard stains on the body are made up of rust and the residual grey of the paint base. The upholstery and the foam inside it has also turned to ash, leaving behind exposed coils of metal. The head and tail-lights are now gaping holes like the eyes of a skull. The car is a Maruti 800, the first small car to hit Indian roads, way back in 1984. Now there is talk of phasing out this once middleclass dream car.
Parwana, incidentally is a moth in Hindi. It is often poetically used as a metaphor for compulsive self-destructive behaviour, like the moth that spirals into the flame after what becomes its last dance around the fire. What remains is a chintinous frame on which once hung a moth shaped being.
Email Post