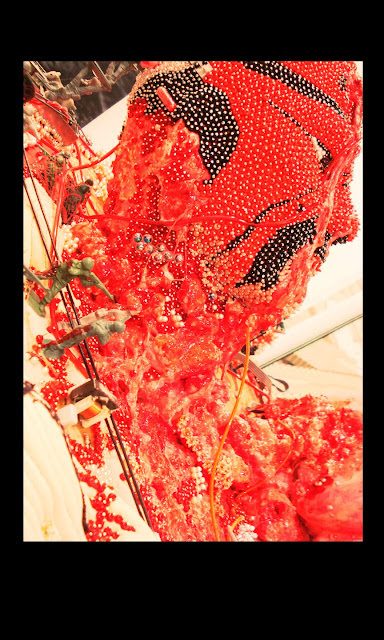 Ram Dhakeli was of course dreaming. The dream had started when MD-saab hit the red wedding bed. After the spurious terror of her dream Ram Dhakeli was overjoyed to see MD-saab sleeping on his side facing her. The protoplasm on his back was gone. He was at peace. Not gone but alive and eager even in his sleep to inhale the scent of his new bride.

Ram Dhakeli knew that a death dream was an auspicious dream. She could now see her life change colour. Turn into something she had never imagined. But the change was slow and at the same time sudden.

She hadn’t quit her job at Vun Vibhag. She and MD-saab remained Boss and P2MD. They came to work at different times, took different roads. She had her red Atlas cycle with basket, headlight and collapsible stand. He: an ’80s Ambassador painted rare rust.

She tried inviting him to her new house in Scutler Palace when MD-saab was away but RETDLTCOL Budge did not budge. He preferred the silent familiarity of their soured bond to the eager strangeness of a born-again friendship.

It’s early December and the road’s teeth and cavities are hibernating. For once the sun is too far away to make the teeth shine. Ram Dhakeli is on a mission, without her bicycle. She is wearing her favourite tie-n-dye night blue sari. Once out of the office she wedges a droopy pink hibiscus in her oiled plait. The diamond on her nose is playing light tricks like a pinhole camera. She is going to invite Miltree Sir once again to her house for dinner. And she isn’t going take a ‘no’ for an answer.

It is going to be a surprise for both MD-saab and Miltree Sir.

Far in the distant snout of the hibernating road the invisible Boo Man is furiously paddling his bicycle. He is speeding with a giant hairpiece of snake balloons. Today he is Big Mommy Medusa on a bicycle. He is speeding because people are trying to shoot him. He is being shot for a American TV documentary called 'Curious Careers'. Boo Man has been paid the cost of his air and plastic merchandise twice over for the two days of shooting. This is in excess of the five thousand rupees he’s been given as advance payment. He is asked to play himself i.e. Boo Man and avoid meeting the camera eye to eye.

Ram Dhakeli is unaware of Boo Man or the shoot. She is unaware of the curious effect that Boo Man will have on her life. His bicycle is sliding down the hibernating road. He is approaching the road’s end which is like a huge croc jaw open at sixty degrees. So much wind has never passed through Boo Man’s bicycle spokes. Dust is following him like a swarm of angry bees. He is unaware of a night blue obstruction near the croc jaw’s end. He sees Ram Dhakeli but it’s too late and the bicycle, plastic hair and all, crashes into her. Rubber brakes jam on steel, two strangers scream, balloons burst and plastic things break. “CUT,” shouts an angry voice on an angry sounding horn and people rush to rescue Ram Dhakeli from a mangle of steel, plastic and rubber. The noisy collision sends an alarm to the screechers of Budge House. But after the brief pause Budge House is hysterical with laughter.

The road teeth have again claimed the accidental Boo Man. Ram Dhakeli’s a victim of Boo Man. Boo Man is hurt. A plastic horn splinter has entered him in the soft of his neck, just above the jugular. A first aid box comes to deliver him of the pain and blood loss. Among the crew is Yogi Hanneman, assistant cameraman to the crew. He is the first to reach Ram Dhakeli, who is slowly regaining consciousness.
Email Post
Labels: Brotherpur Lucknow