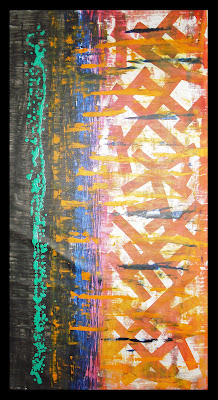 Weird, that something as remote as the image of a solar storm may occur to me... especially so soon after I do the Saturn rings... I know you may be thinking why is it weird, because there is this common planetary grid that's running across our solar system, the grid that holds us all.
But that's not how I see it. I am also seeing it as a subconscious plot, a schema... an astrological cipher that is adding up to something... something I don't quite know yet. Aquarius by the way is ruled by Saturn and is six signs away from Leo, ruled by the Sun. Saturn is also the sixth rock from the Sun. They are diametric opposites, raging with cosmic testosterone and mutual hostility but they're also very close. In Indian astrology Saturn happens to be the son of the Sun and his consort Shadow (Chhaya). Where Aquarius is Dionysus, the eternal rebel, the dark and mysterious one, the intoxicator, the breaker of boundaries, the orgiastic ecstasizer [and as well as my ascendant sign :)]. Leo is, Apollo, the keeper of light, form, order, boundaries, laws and music.
Saturn, along with Jupiter, is also the astronomical replica of the Sun, where everything and its cousin cluster around it in eternal orbits, like slaves driven by an absence of choice. And Saturn is a hard task-master.
Making these works has been exhausting so I am taking a short break... will be back soon!!!
Email Post