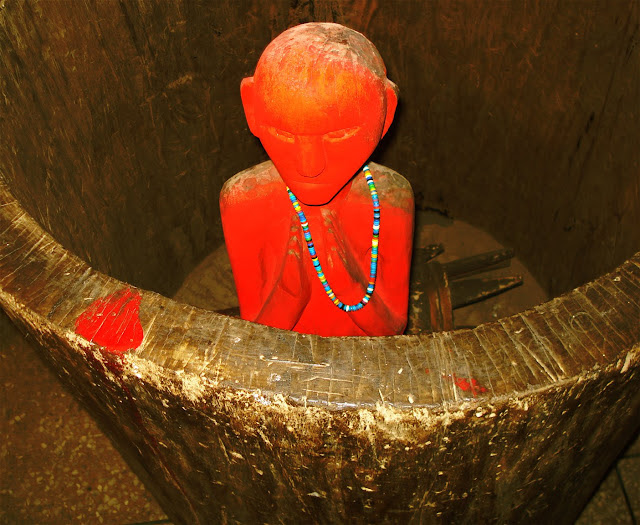 The red wedding bed was a catafalque of colour, made of flowers hand-picked by Forest Department rangers from their own departmental forest. Jasmine and marigold were tied up with green leaves, covering Ram Dhakeli like a jelly fish. She sat in the middle of the white, marigolden and green, sleepy-eyed waiting for MD-saab to part the flowers and step into her garden patch.

When MD-saab lifted the white-marigolden-green veil and called out her name Ram Dhakeli shivered as a strong chill rose from the virgin mound between her legs, hula-hooped around her middle and then erupted like a psychedelic bomb inside her head. It gave her a feral headiness that she’d never known before.

But the knight of the car-o-baraat looked strained and unsure as he unshoed himself and fell face down into Ram Dhakeli’s flower bed falling immediately into a deep sonorous slumber like a coal miner.

Ram Dhakeli was back as the new-born Venus on her Theak Hai seashell. She was alone floating on a sea of blue seashells. Sleep came later, on ant legs, and carried away her silent reverie of escape and arrival.

Morning arrived in MD-saab’s cold and awkward embrace. It was as if he had been shielding her from something. His eyes were shut. And even Ram Dhakeli’s movement didn’t stir him.

It was only when she sat up she saw what had happened to MD-saab.

Ram Dhakeli let out a scream but it remained unheard by the workers and guests outside.

MD-saab’s body had been cold for hours. Even the blood on his back had returned to a thick protoplasmic state. Ram Dhakeli’s Superman had taken a bullet in his back.

And she was single again. Once again single by marriage.