Fear enters women’s minds like a corkscrew.
And then it turns.

Ram Dhakeli, as MD-saab had reminded her, was “after all a woman”. Putti Lal’s corpse often bled inside her head like stigmata. He was soaked in red when they had brought him home, a night after the wedding. His eyes were closed as if in deep sleep. His liquor soaked insides were pulled open at the point where the ribs make way for the boneless fall of the stomach. A blood-red umbilicus hung out of Putti Lal’s stomach. It looked as if he had just been born. All grown-up and hairy. Was he really drunk on the local brew? Or was the bull was in a rut? Could a rut be so fatal? Ram Dhakeli could not bear the idea of MD-saab riding a wedding horse. No way was he going to ride a rut-able beast. There would be no baraat; no horse, no brass band and no dancers at her fairylight-lit mausoleum. No way was MD-saab exposing himself to the whims of a rut on hoofs.

The baraat would travel on wheels. A car-o-baraat.

Several cars were pushed into service. The car-o-baraat moved like a Chinese New Year dragon, on wheels of which there was a surplus by at least a dozen and a half. The dragon let out continuous fumes of burnt diesel from its quaking nostrils. Such was the traffic. It was a temple-trip Tuesday. The traffic went swearing and snarling past the car-o-baraat dragon. The surplus of a dozen and a half wheels had to be unsurplussed for the car-o-baraat was nearly without guests. So guests were picked off the streets. A couple of about fifty-five were first. They were out on an evening walk. Other guests included two roadside romeos out fishing in the temple trip rush. One Pomeranian too small to be noticed was found on a woman wrapped inefficiently in a burqa. She was a dog thief and happy to be given a free ride. Others refused to be picked up for a wedding they hadn’t planned for.

Ram Dhakeli fainted waiting. The corkscrew had turned too much. MD-saab was getting impatient inside his New Year dragon. So the car-o-baraat was stopped at an ‘English Wine and Beer’ shop for refuelling. Beer and English wine were purchased fresh from the shop that looked more like a prison cell. Styrofoam cups were cheers-ed and MD-saab was three-cheers-ed for being such a jolly good fellow. Everyone joined in the midway celebration except the burqa-wearing dog thief because she didn’t want the Pomeranian to escape. 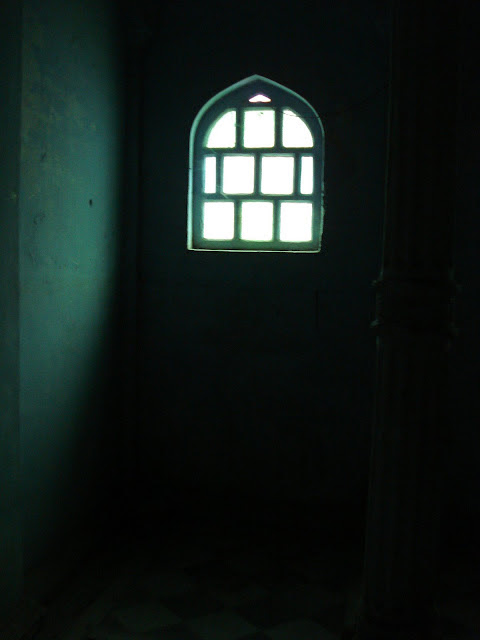 Ram Dhakeli was conscious when the circles were walked round the fire. There were three people walking the circles because MD-saab had to be led by the hand. That was the first time Ram Dhakeli saw Miltree Sir. The three of them went round and round the fire. They were kids again playing Ringa-Ringa Roses, tying themselves into a huge fiery knot. And then they all sat down. For the wedding feast.

The buffet was arranged on the road outside the mausoleum inside the rented privacy of a cloth and bamboo marriage hall. Ram Dhakeli was red once again. The corkscrew turns had given her face a flush like circus make-up. She was wondering whether it was her fate to be single by marriage. But MD-saab’s English wine-soaked confidence lifted her spirits. Everything was ‘Theak Hai’. Ram Dhakeli smiled behind her red and gold net and traced her hennaed fingers over the stoned relief of her Niner ring. She felt the power return to her hand.

Around the fire Miltree Sir played a three-way proxy. He had hand-led MD-saab, the groom, and played Ram Dhakeli’s father giving her hand, body and soul to his former friend for seven births and seven deaths. And then he was also a friend, who was not a friend. All this he did with a great eyeballing skill, accomplishing a feat of dodging the barnowl stare of his former kachha pal. After giving his proxy daughter in marriage retired LT COL retired into the night, out of the cloth and bamboo marriage hall into the temple traffic.

The marriage complete, the car-o-baraat returned with Ram Dhakeli dozing on the daily exercised shoulder of MD-saab. Her fairylight-lit mausoleum was left to her old in-laws, collected from various neighbouring boroughs like mercury drops to show their approval of their daughter-in-law’s marriage. Ram Dhakeli left Putti Lal’s photo-haunted mausoleum with a head heavy with corkscrew turns. The tears fell kohl-black on her sari making stains that looked like diagrams psychologists used to read their subjects’ minds.

She was entering a new world. MD-saab’s world. Age or the passage of time that separated them meant little to Ram Dhakeli. For her, he was Superman riding a Chinese dragon. The MD of her life. And she was his P2MD.
Email Post
Labels: Brotherpur Lucknow