Nostalgia for the Future 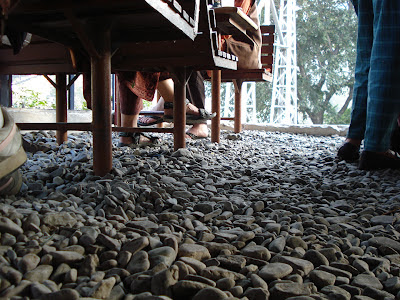 Memories are like rolling stones. With time they get smooth around the edges, losing their natural tendency to evoke response: cause pain or jubilation. What is left behind is a dull heaviness or heavy dullness… like the shadowy memory of a memory. Somewhat familiar, somewhat strange. A memory lying among many other similar memories: settled, not moving, buried under footfalls and the debris of time… or the collapsing of images of people moving, eating, smoking, arguing, breaking wind and thinking about other people and places. Images forming, breaking down and falling over a heap of other broken-down images with rounded corners.

Perhaps to be picked up somewhere in the future as a work of art. A moment ticking with tension and the promise of a living memory.

This picture formed the background of our first fight. A disagreement over our respective skills as picture-takers. I had hated a picture she had taken of me. And she had gone on to rubbish my recent photographic endeavours. The camera, like us, was in a moody sulk, looking down at the shuffle of feet on polished stones, at the cups of tea and coffee being brought in, the clanging of empty plates and the white memory-making noise of those around us.

(View from the German bakery and café at the start of Laxman jhula, Rishikesh)
Email Post