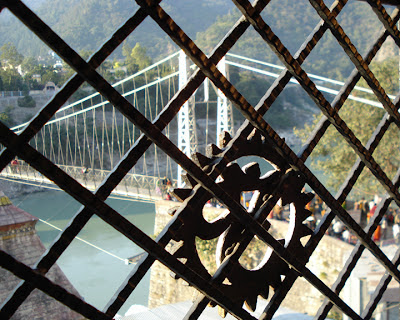 Rishikesh is a funny place. The other day when I was walking towards Laxman Jhula (one of three suspension bridges in the city) I heard a street vendor yelling: “It’s a sign from god. It’s a sign…” The sign was about one metre long. All traffic had stopped for it. People of the street had made a daisy chain of hands to hold back the traffic. The snake, most probably a non-poisonous one, seemed to be in no hurry to cross the road, taking its sweet time as it slithered out from the compound of a Catholic church, that looked like a Hindu temple, to a lepers’ colony across the street.

Some lepers were trying to shoo away the reptile with their fingerless hands but the snake was nonchalance personified as it made its way inside a nearby Shiva temple. Shiva once used to be the god of all fauna. He was known as Pasupati and only later did he metamorphose into the Destroyer among the Trinity with hooded snakes coiled around his neck, arms, waist and ankles. It was indeed striking to see the snake head for the Shiva temple and not any other place. Perhaps the street vendor was right.

Later, when I was repeating the incident to Ravi, the ferry guide, he asked me whether the snake was “domestic or wild”. Domestic snakes? That got me thinking… could a snake be like a cow, domesticated and obedient? Full of milk and manure. Or a snake by common consensus is Mystery, if not complete out and out evil. It’s more often than not a sublimate of many human neuroses… from the story of Genesis to the Greek tail-devouring Ouroboros to the Aztec flying snake to Freud’s phallic interpretations. It is perhaps an example of what Rudolf Otto referred to as “mysterium, tremendum et fascinans” or an experience that is mysterious, terrifying and (yet hugely) fascinating.

The sign from god disappeared as quickly as it had appeared and the street went back to it motions. The street vendor also went back to his selling of plastic toys and bugles.

God had signed his name with a snake. And that was that.
Email Post
Labels: Shivpuri