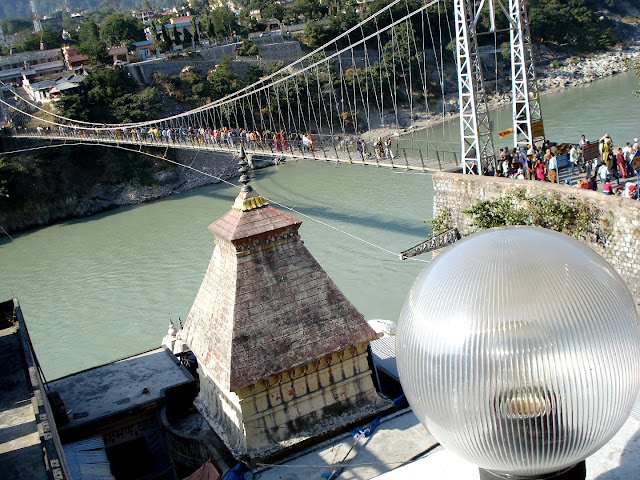 Yesterday I began a new chapter in my life. I had my first day at a water rafting camp in Rishikesh, actually Shivpuri. This is where I will be camp manager for next six months. The day, compared to my life in Delhi, was full of sweat and wonder. I began my day with trek to a place called 'View Point'. This is the place from where our Beach Camp can be seen.

After lunch we went to the place where the Beach Camp will be set up on the other side of the Ganga. Everything: tents, food and beds are ferried to the Beach Camp on a raft which is a huge task. In the days to come I shall find out exactly how difficult this is. To get to the Beach Camp we have to cross a rapid called Return to Sender. It's so called because a huge boulder jutting out into the river reverses the currents in such a way that everything is, well, returned.

The beach next to this rapid is often strewn with return gifts such as animal carcasses and sometimes of those humans who knowingly or unknowingly make the turbulent river their last resting place.

The stench at Return to Sender is often a precursor to visions of wild putrefaction. We saw two cows very dead and very bloated on the beach. Arjun, the river guide, also showed me my first beach skull. At first I thought it was a conch shell. But they said the river had no conches. On closer inspection I found out it was indeed a human skull lying face down in the sand. I picked it up and saw wet sand pour out of the eye sockets. the skull was connected to a loose vertebral column half encased in leather-like skin. Umm...quite like a fallen fruit: too ripe and too heavy to hang on its tree.

I returned with the euphoria of a debut. I don't know whether it was about having crossed a rapid of having touched my first beach skull.
Email Post
Labels: Shivpuri