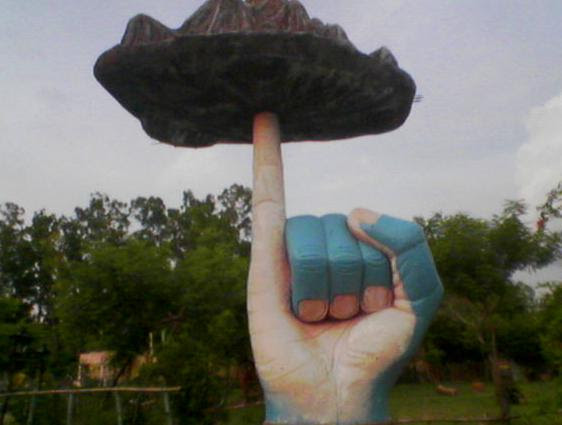 Soon after the promotion came Ram Dhakeli's birthday. It was an equinoctial September day when day and night have equal hours. Ram Dhakeli was to get her share of equality too. MD-saab's Amitabh Bachchan voice had already filled her head with the hum of a budding heartache. That day, she got to sit in the exalted MD office. It was her first. MD-saab was a man of few words: whenever she answered his office bell it was to take orders and nothing more. That day MD-saab asked her to sit down on the squeaky leather chair meant for those with whom he wished to discuss work. It was the first time Ram Dhakeli was to look into MD-saab eyes and catch him smiling behind them.

That warm September day was also circled red on MD-saab's personal calendar. It was the beginning of his spring.

"Ram Dhakeli, your work is very good," he said and cleared his throat. "In fact, it is very, very good." He stopped and nodded meaningfully at Ram Dhakeli and cleared his throat again as if his words needed help coming out. And in that silent pull and push of words MD-saab suddenly slumped into a reverie. The cotton sari that hugged Ram Dhakeli's slender fairness cream neck was gradually sliding off it. The inside of MD-saab mouth felt like desert sand. His lips too were on fire. But continue, he had to. "Please quit this job, Ram Dhakeli." There was that look on his face that begged another clearing of throat. But he wasn't allowed. Ram Dhakeli's eyes were on him piercing his soul with a look that butchers sometimes see in the eyes of their kills. "I want you to come and work for me… in my house," MD-saab offered clumsily to melt the tension in the air.

Ram Dhakeli was disappointed. This was not what she thought he had called her for. "No saab, I am happy here," she said locking her harmonium-player fingers into a lattice of skin and bones. The chair squeaked again. The squeaks were like a cue. The birthday bonanza had been cued to a halt. She got up to leave but MD-saab waved her down with a halfway salute. She sat down. "Please take your time, Ram Dhakeli. You are after all a woman, a young woman. Unmarried, I mean alone. Please take your time. Think about the future."

Ram Dhakeli was new to the politics of words. She stood up again. This time MD-saab didn't stop her. When she was at the door MD-saab swung something round and metallic at her. It touched her at the sensitive hollow of her fairness cream back. The sound of metal on floor made her turn around and inspect the fallen object. It was a ring, a solid 22-karat, weighty and stoned with the precious niners. Emerald, pearl, garnet, opal, turquoise, ruby, sapphire, amethyst and diamond. Nine stones for the nine planets. The whole universe on a finger. Ram Dhakeli had up until then only envied women with this sort of power. Never in her wildest dreams had she thought she would become one of them. "It's for you, keep it and think about my proposal," said MD-saab as he thrummed on his wide forehead. "You may go now, Ram Dhakeli. You may go now…"

Ram Dhakeli was frozen. She couldn't get her harmonium-player fingers to strike the right notes or her vocal chords to express gratitude. MD-saab was staring at her unblinkingly, like an owl. His fingers still danced on his forehead. It signified nothing significant. He just liked the sensation. Like horses galloping on his head. For MD-saab this was a big gamble. The power and prestige of his exalted office hinged achingly on the reply of a mere woman, a widow and a member of the fourth-class.

"Dhanya…. dhanya…. dhanya," spluttered Ram Dhakeli like a frigid car engine. She should have stuck to something less speechy like 'Thank you', she thought.

"It's okay, Ram Dhakeli. It's all right. Theak hai." MD-saab allowed himself a smile, his first on that warm September day.

He repeated the 'Theak Hai's till his voice was trapped and sound-proofed by a mesh-wall of words. Ram Dhakeli recalled MD-saab's 'Theak Hai's later at night when she was lying on a string cot: her bed and bedroom. She was after all freshly 22, in love and suddenly a bride-to-be again.

Sleep came on invisible ant legs and crawled all over her. It began at her feet, covering her like a blanket. Ram Dhakeli dreamed of MD-saab and his wonderful Scutler Palace house. It was a confused dream for it was a palace-house she'd never seen before yet it filled her with a strange and paradoxical been-there-ness.
Email Post
Labels: Brotherpur Lucknow