Khajjiar, May 12, 2007: "It's like you're living your life in the negative," says Jassi, my friend, "'coz that's when people have white hair, no?" This sets me thinking. Thinking whether the silver in my hair is actually photo-sensitive; clicking and carrying pictures straight to my brain, bypassing normal conductance through the eyes. And thinking this, I stray alone towards a blue bridge. 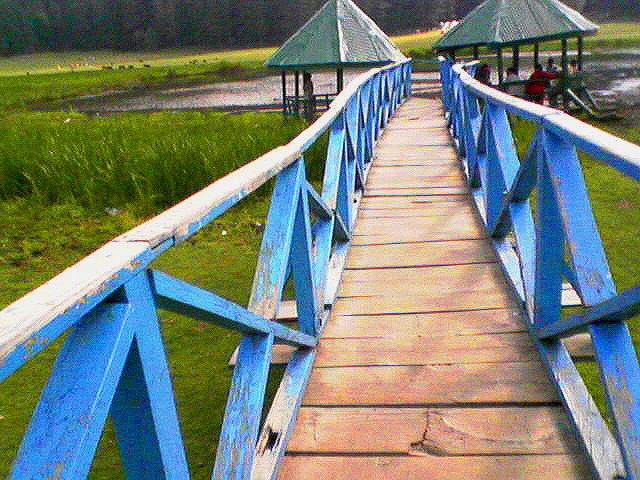 On the blue bridge, I--like a psychopomp--face two worlds. One green and meadowy. The other black, hole-ish and watery. A small reed island licks the water like a tongue. Like the hands of Time on a clock-face. It's a floating island. An island within an island. An island of hydrophytes on an island of water. The reed-island is an indeterminate dirty-green. More dirty than green. It's probably brought from another planet as non-living spores.

The lake is where the meteor may have hit the ground and spiralled like a huge oil drill into the earth.

Like a loud cosmic fuck. As an interplanetary intercourse.

Some say the lake's a bottom-less pit. No-one has ever come of it out alive. The fear of it has probably not allowed many to go in it in the first place. But myths have low tolerance for details. Myths are like loud cosmic fucks.

Fucks that have no cause, no reason. They just happen, as they say, like that.

Later when browsing through a picture-book on Himachal, I am told that the bottom-less pit is actually one arm of an underground horseshoe. The other arm opens at another lake. Lake Rewalsar near Mandi. Together the two lakes make a bottom-less pit. Bottom-less, but with two mouths.

Not even the animals graze near the lake. They say because it is banked by shifting layers of wet, black earth. Or some alien loam that breathes and lives. And perhaps swallows those who come too close. The animals have learned their lesson, I guess the hard way.

On a stone-paved road around the meadow, tourists take horse-rides on domesticated ponies feeling like Chengis Khan storming down the steppes. Inside, on the golf-course green, eager boys sell strange, vision-altering rides. Para-gliding for 500. Zorbing for 200. Some even sell 'original folksongs' on their lyres. I spot one 'walking' a rabbit on a leash. "What's that for?" I ask Jassi. "Pictures," he says. Meaning you can pose with the rabbit and feel lucky and adventurous.