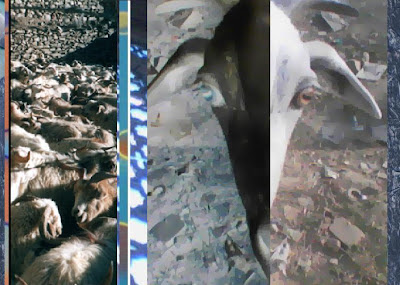 Some nights sleep comes counting, softly on a cloud of woolly sheep. And then the cloud bursts and turns into a nightmare, curing the sheep of their habitual innocence. These clouds have inside their cloud-centres thunder and lightening, which produce monstrous, transmogrifying storms of images and sound. Nightmares. These nightmares change everything. Change the habitual innocence of normal, everyday perception into something screamingly dark, horrible and paranoid.

This is the fear of awareness. Awareness of something bad and evil that has happened in the past, both individual and genetic, and will again somewhere in the future. This is also the fear of possibilities. Evil possibilities. The possibility of the good turning ugly. Of rancidity and sourness and fungification. Of dazzling star-bursts containing within them the devastation of a nuclear blast.
Email Post
Labels: Dreams