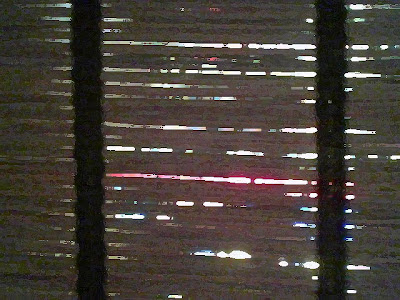 The camera is panning the living area of a biggish flat, taking in details of an L-shaped room… the grey terrazzo floor, the dog-bitten legs of a sofa chair. There's also a print of Munch's Scream on the wall screaming through the head of a tennis racquet hanging over it and a blue-green octopus scowling in the centre of the room from inside a fishbowl.

The late morning sun is entering the room as projector beams carrying in them dust motes, like phantom cables connecting the window to the door. The camera turns at the 'L', enters the kitchen and stops at an electric kettle that is whistling away, waiting to be rescued from the heat in its stomach. The camera zooms onto the stainless steel surface of the kettle and catches a glimpse of a man's wet-haired face.

He has just come out of the shower. He is young-looking, thin and long-haired. He is wearing a white towel around his waist. The camera moves behind him, framing him in the kitchen doorway in a slightly out-of-focus blur. From the back his movements suggest he is pouring himself some coffee from the kettle. As soon as he puts the kettle down, the doorbell rings. "Awffuck," the man says loudly.

As he absent-mindedly turns towards the door his hand hits the water-cooler. The mug falls from his hand and he lets out a painful yelp as the hot coffee splashes on his legs and feet. The mug slo-mos down, hits the floor and breaks into two. The bell rings again. This time it sounds very loud and urgent, like an echo of his scream.

The man lifts his legs, one by one, into the kitchen sink and opens the tap to pour water on his feet. He then limps his way to the door. When he reaches the door the bell stops ringing. The man says, "Awffuck," as his face contorts in a mixture of pain and anger.

He opens the chain lock and the latch and swings the door open as if ready to spray the landing with bullets. There is no one at the door. The camera takes his place at the door staring into the empty landing and then into the stair-well.

There is no one.

Terror takes hold of his face as he raises his arm to block an invisible attack. The door slams shut. The man's familiar scream rings out from behind the door. Darkness from the edges of the frame begins closing in on the keyhole from which is staring an eye.
Email Post