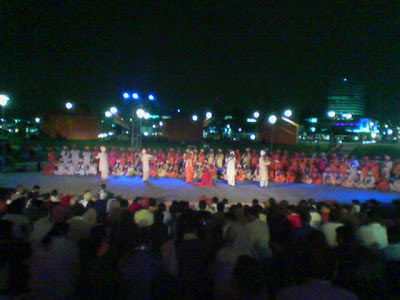 There is a reptilian frenzy in the way warm breath passes through the tumescence of a gourd. A dried gourd. In Hindi called a 'been'. Now, become a 'has-been' because the Government suddenly decided to invoke the Wildlife Protection Act of 1972. The warm breath whips up inside the been a sort of soprano storm, coming out from its other end as the sound of a thousand horses, screaming.

No wonder the snake is charmed. Raising his head, lest he be crushed under the hooves of a thousand horses.

Above is a picture of about a 100 snake-charmers playing 'Amazing Grace' on their gourds. They also played 'Auld Lang Syne' that Hawa Singh, their leader, said they had picked up while playing with the bag-pipers in Scotland during a Festival of India.

There used to be a time when India was known as the Land of Snake-charmers and the Great Indian Rope Trick was a metaphor of all sorts of woozy Indianisms that surpassed western logic and understanding.

Now we have a snake-charmers' wind symphony that plays Amazing Grace.
Email Post