"Now I am become Death, the destroyer of worlds."
--Father of the Atom Bomb J. Robert Oppenheimer's famous quote describing the 'Trinity Test' or the first atomic explosion in Los Alamos, New Mexico. Oppenheimer was paraphrasing Krishna in the Bhagavad Gita.

Walking on Brahma's lake is not to be confused with walking on water. They are two entirely different things. Brahma's lake is a vortex. A lotus leaf-shaped vortex that pulls into itself everything. And yet like the lotus leaf nothing sticks to it. The lake is small--you could call it a small lake or a large pond. It's actually a huge hall of mirrors, containing reflections and reflections of reflections and their reflections and theirs and theirs. 'Everything' is contained in it. In it everything is also upside-down. It's like looking down a long tunneling telescope. A spooky continuum with no end. Memories are stored here from no-one knows when. But the lake and its immediate surroundings are quiet like a muted TV. It's as if everything--people, animals, buildings--is stunned by what there is to behold here.

This is Brahma's safety locker. And tool kit. In it lies the blueprint of his grandest illusion. Life.

People come from different corners of the world to stare into this abyss. But it's not really an abyss. It just seems like one. The stories say Shiva had rained thousands of human skulls into the lake as a mark of protest. Now this was Brahma's havan-kund or sacrificial well and throwing skulls in it is not only blasphemous but also unthinkable. But Brahma's greatness was his silence. He simply refused to react. If there is evil there is also goodness. If there is peace there is also aggression. If there is a creator there is also a destroyer. That's the way I have created it. That's the way to equilibrium… the way to my wisdom, Brahma must have thought. The skulls have by now dissolved and turned into a white powder.

Pushkar also has the only (or only other) Brahma temple in the country. They also have a story for it but the more plausible reason seems to be that no-one really needed the old chap. His work as creator was over and done with long ago. So Vishnu, the sustainer, and Shiva, the destroyer, became more relevant. And Brahma remained in his ivory tower, perhaps creating other worlds.

While Krishna is Vishnu's avatar, he is also the human form of the trinity, which is why he is also called the purnavatar or complete incarnation. 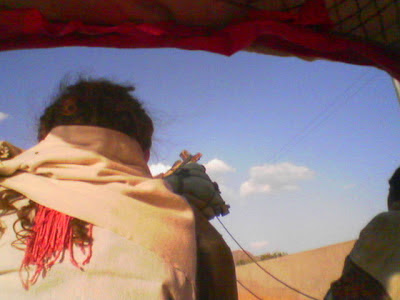 In our journey Krishna is a camel. A sharp but temperamental 8-year-old who sometimes bolts like a speed-walker, sometimes refuses to move, snorting deeply with bared teeth. This happens especially when he sees a fork in the road, one clearly leading to his master's house, where food and rest await him. We're behind Krishna in the cart with Pawan, his driver. Lina, Serge, Kalima and I are taking a camel ride into another world. And Krishna is our charioteer. Krishna is also time on four padded feet.

In another reality, a certain white powder is making its presence felt at the ghats in Pushkar. And this time it is not the foreigners doing 'that shit'. "It's the local boys who are getting hooked," says Kalima. It's like bringing coal to Newcastle. Tourist dollars have brought in an expensive numbness for the soul. A new sniffable 'shanty-shanty'! There was a time when bhang or hemp balls would suffice. Then came the foreign liquor. Now the flavour of the season is coke.

"You saw Hariprasad Chaurasia performance, Kali Ma?" a guy in red trousers and shirt asks suddenly appearing before our table at Sun Set Café. "No," says Kalima. "You remember last Shivaratri, Kali Ma?" he asks again. "I don't want to have this conversation. Please go. Goodbye," says Kalima. The man in red salutes Kalima as if she's just given him a medal and walks away smiling. "You saw his eyes?" she asks us as soon as he's gone, "I saw him sniffing over there… he was just making small talk trying to cover up… everyone here is getting hooked on to that stuff".

Krishna is taking us to Kalima's favourite place in the whole world. It's village called Ajaypal. It is named after the founder of Pushkar, Ajay Pal Chauhan. We are going to a place where there are strange energies. Like the lake some 12 kilometres behind us. 'The Place' is an old temple from where a gnarled old tree stares into a cross-shaped step-well below. The wind is singing here. An old song-less tune that's probably the sound of the Big Bang, broken down into single notes and then remixed. The sun is also playing hide-and-seek behind a herd of sheep clouds. Somewhere in the far telescoping distance a peacock family is fluttering its wings. 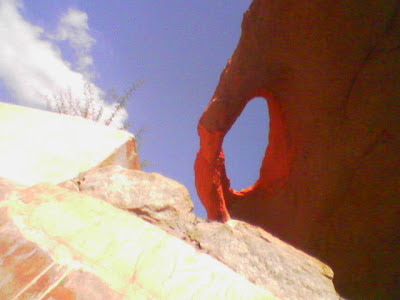 We have left Krishna and Pawan behind at Aloo Baba's hut. Aloo Baba is a potato-eater. He eats nothing else. "Why get used to things you will have trouble finding in the jungle," he explains. Aloo Baba's has just finished constructing a 'guffa' for himself. It's a natural niche among the rocks that he has walled off with bricks and cement. A 'naturally-manmade' cloister! Aloo Baba's also made a platform for the Eye Rock. The Eye Rock is a cure for persistent cough, he tells us. But you have to pass through it seven times. Like a thread passes through a needle.

A wide dirt track takes us to Ajaypal. Under the midday sun the track is glittering with silica flakes like pieces from smashed CDs. Some silica is also 'growing' on pieces of marble. These rocks are like works of art. 'Maya rocks' we call them because you see in them what you want to.

Back in Pushkar, at Sun Set Café the evening, our last, has just begun. We are sitting by Brahma's lake sipping ginger-lemon chai with apple crumble from the nearby German bakery. Having Kalima in your midst is like sitting in the VIP box. Everyone nods to her. Her name, 'Kalima', also adds to the weight of her personality. "Kali Ma, Kali Ma," the children shout and run after our cart. Kali as we call her loves the comparison. She's been a sadhu and continues to be one though not in the obvious garb of an ascetic. We are a night away from Shivaratri, and Kali is ready for her role at the occasion. "Your husband's celebrations," one balding man stops by to remind her with folded hands and a smile. Kali says something to him about the celebrations back in the old days. He agrees and then parts. 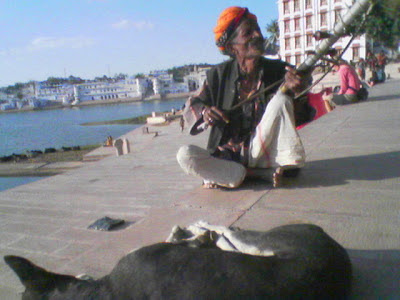 The sun is now hanging over Brahma's lake like a sigh. The evening musicians are out. Ours is one of the older ones. And he's playing something so deep and haunting that he could well be gliding his bow over the lake. Lina recognises it as a Meera bhajan and starts to sing with him. Lina, German like Kali, has been in India for about three decades. She requests him for something in Raga Yaman. "Hum it for me," he tells her, "I don't know Yaman." Lina does and begins singing, as Serge looks the other way pretending not to hear his wife.

Two black-hatted Lubavitch rabbis are on their evening rounds. "To convert people," Lina had observed the evening before to which Wolfgang, who we'd just met, had protested rather strongly, "There is no conversion in Judaism". We had all agreed that they were only speaking to the Israelis. Waiting like black-hatted lifeguards on Brahma's timeless beach.

Under the ancient banyan tree, next to where the humble palmist looks daily into the future is Andre, in white kurta and pyjamas doing a slow-motion tandav or last dance. His is a daily performance under the banyan tree. Andre is a goner, like quite a few people here who have walked on Brahma's lake and never come back. They are here only in body. "He's totally lost it now. He's done some good work on rubbish collection here… but after his lover's family got him a wife, Andre's gone totally cuckoo," says Kali.

The nagara drums are now beginning to gather momentum. A violet haze is gathering over where the sun has just sunk. Directly opposite at Sun Set, Wolfgang and I are savouring the last few moments of Brahma's silence. And then out of the violet haze emerges the dark, grinning face of Miss Rose. "I do Reiki, Swedish massage and all sorts of body healing… if you want anything… just anything… smokes, powder, paper, pills, anything just call me… My name is Miss Rose." We thank Miss Rose and decide it is time to leave. I for Delhi And Wolfgang for I don't know where...
Email Post