Done In By A Whore 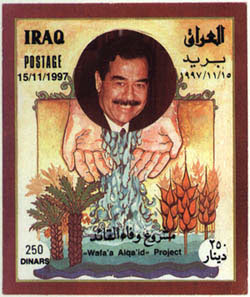 I am with the Vatican on this one: you cannot right one crime with another.

And I am getting more and more convinced of America's fear and loathing of Great Beards or leaders with any sort of facial hair. Especially this past century, where most of America's bogeymen sported either a beard or a moustache, even if it was as meagre as Hitler's. Perhaps it has something to do with being 'clean-cut' and 'American'. Or perhaps there is some sort of a deep Oedipal Complex at work here: America distrusts any kind of patriarchy, which the beard sort of symbolizes, especially if you've grown up on The Ten Commandments and Samson and Delilah.

America is suspicious of leaders who do not have a written mandate as seen through the ballot box but who have arrived with the mandate of the heart: felt by the people but largely unwritten and therefore not quantifiable in numbers (which if the Bush re-election is any evidence is not above board either). And American notions of Democracy certainly do not extend beyond its borders as was evident in the presidential "with us or against us" call to war of 2001.

I also see the informed globe steeped in an idiotic frenzy. Especially if you see the headlines since America's latest bogeyman went to the gallows. There is talk of investigating the filming of his last moments… how anal is that! What about investigating the 'investigations' that went on in the name of the trial and the summary sentence and execution of the man. How about investigating the man who sent 3000 of his troops to die in an alien country just because he wanted to avenge an assassination attempt on his father? The numbers are certainly more than those Saddam was executed for. News reports since the execution are being adjectified with words like 'ruthless', 'most hated' and 'anti-western' when in truth all of them are nothing but propagandistic exaggerations. If Saddam was ruthless, so were Alexander (whom western historians called 'the Great'), Caesar, Elizabeth I and Catherine (also 'the Great') and more recently George W Bush who rubbished reports of civilian deaths and casualties as "collateral damage" for the great war. 'Most hated'? I don't know, perhaps an opinion poll of the Iraqi people would say more clearly. He was certainly not anti-western as he headed the only state in the Persian Gulf not run by the Sharia and which had a western-style legal system.

News channels (most of the English ones being either American or British) are tireless in showing file pictures of Saddam's statues being pulled down and people celebrating with fire from AK47s, while quietly forgetting the anger and resentment evident in daily bomb attacks by armed Iraqi militias. Why are the people attacking American troops if they are so happy with the 'liberation' that they have brought about? The intent for future mischief is also evident in America installing a Shi'ite government in a Sunni dominated country. Divide and rule has been the defining credo of 20th century colonialists and it continues with America and its Allies.

Today, after four days of reflection over the way Saddam walked to his death I see America as a country with the heart and morals of a street whore. She's cheap. She sticks by none. Loves none. And she will lie through her teeth to save her skin.
Email Post