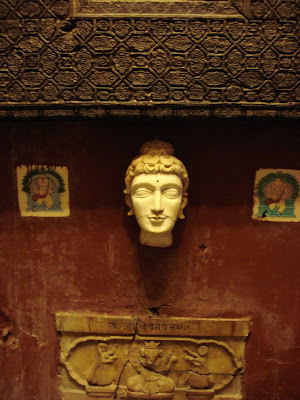 About 75 years ago the National Socialists in Germany set up a unique 'organisation' called the Forschungs-und Lehrgemeinschaft das Ahnenerbe (or the Ancestral Heritage Research and Teaching Society). Presided over by SS chief Heinrich Himmler, the Ahnenerbe's brief was to establish the superiority of the Aryan race through an "education offensive". It was also to seek historical and spiritual justification for the inconceivable horrors that were to follow in the name of racial superiority. On hindsight the Ahnenerbe's claims of a near-mythic 'Aryan race' may seem laughable. But the German nation under the Third Reich had suspended disbelief. All thanks to a powerful propaganda machinery that mixed facts and fantasy so immaculately and at such breakneck speeds that even the best minds were left wondering.

The Ahnenerbe insisted that Germanic Aryans, a superior race of 'blue-eyed and blond' people, were humanity's cat's whiskers. The Ahnenerbe's white supermen most resembled the dazzlingly gifted 'Thule-Hyperboreans' or as some versions put it: the god-men of the now-lost island of Atlantis. In other words these people had unlimited rights to consumption and rulership, especially in the racial wasteland that the world had become because of the 'Jewish vermin'.

These distinguished supermen--Himmler and his team of 'scholars' were trying to prove through various unorthodox means, which also included the use of calipers to measure noses--were the rightful rulers of a world civilization. The Ahnenerbe's role was not merely to serve as a research organisation but to be a precursor to a new religion of the Third Reich. A religion based on extreme exclusivism (broadly excluding not only the world's Jewry but a large part of humanity itself). The Ahnenerbe was to 'replace' traditional Christianity's deference to the Jews as the 'chosen people' with a new twist.

The Ahnenerbe was to leave no stone unturned in its effort to achieve this. And its vast charter encompassed such diversities as Tibetan Buddhism, runic divination, the Samurai code of honour, Lutheran discipline and Darwinian eugenics. The Ahnenerbe also sought to anoint Hitler as some sort of an elite world messiah, whose coming was prophesied in the scriptures of various religions. An expedition to Tibet in 1938-39 was in effect to achieve a sort of occultic approval of Hitler's regime and its grand plan of a Nazi world domination.

Now let's cut to the present. While Bush & Co have no 'stated' agenda of world domination yet. Their mechanisms are quite similar to that of the Ahnenerbe, a role into which the mainstream media in America has slipped quite effortlessly. Yes, the reality of the 1930s is much different from what we have now. But so is the manipulation of public opinion. What is passed on to the American public as incontrovertible fact is in fact 'customised truth' or truth selectively bleeped to highlight only the good and the beautiful.

This present dispensation has put FEAR in the minds of the American public. It has put America in a position of defense and hostility towards the rest of the world. This is exactly how the National Socialists made their foothold firm in the German psyche. The Ahnenerbe was also used to weed out dissent and doubters among the German intelligentsia.

George W. Bush is telling his people that the world is a very unsafe place. 'You never know where a terrorist may be lurking. Don't believe anyone who tells you that terrorists are human. Because they are not. They are just the scum of the earth. Don't ask what they're fighting against? Or why? Or who made them terrorists in the first place?'

9/11 has been compared to the Reichstag Fire of 1933 and the comparison is not too far-fetched. Because it gave Bush & Co a larger-than-life enemy in whose name they could bomb any and everyone they didn't like. We are living in times very similar to the Germany of the 1930s. We are also living in very dangerous times. Because most of us don't even know who the real bad guys are.

America has begun a process of sinister Ahnenerbification. First create ghetto nations, using a fast and effective public opinion machinery. Then use your vast and unlimited powers to bomb the hell out of these ghettos.

So till yesterday if you thought Somalia was a poor country tottering on the edge of survival, today you stand corrected. It's a country of terrorists. How long before the world's Muslims have to wear star and crescent armbands!
Email Post