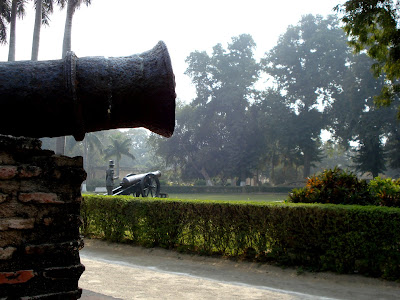 In this life I am Christopher Columbus. Reversing the tide of history. Navigating the rough seas of knowledge and confusion. Sailing in search of an undiscovered ancestor. Actually an ancestral landmass. The original America. The land of myths and tales of maverick travellers and nautical thrill-seekers. A land so rich, so abundantly endowed with all kinds of organic gifts, superlative inventions and ideas of transcendence that its real appearance would blind the eye and cause the jaw to drop in disbelief. An alchemist's dream where base metals were golded and gold served as garnish on food. For currency they used a peculiar form of goodwill, exchanged each time with a broad shining smile. It was a vague transaction where worth and value are intuitively fixed and carried over. In the belief that goodness and virtue were realisable in the afterlife. In the realm of hard-nosed, non-abstractionist discourse this land was actually a no-land. For 'land' by verbic definition described a touch-down on solid ground. And this land was too other-worldly for that. It was proto-utopic, meaning it existed even before the word became a word.

It was also a land of mixed identities. Mixed orthodoxies. Surfacely mixed but unified at the centre. No one really had original claims to this land. Everyone had been 'new here' some time or the other. This land had an enormous capacity to absorb: peoples, cultures, languages, beliefs and DNA. And mixing was necessary. As some early Zoroastrians smartly suggested, it was like mixing sugar in milk. Numerous languages were spoken in this land. Numerous customs co-existed, like electricity cables meeting at infinity or never. Numerous gods were prayed to every morning at its temples and altars. There was also, as St. Paul discovered in the city of Corinth, an altar to an unknown god. A god of the future, as yet unmanifest and discarnate, probably serving time in another universe, another galaxy.

This land had a strange effect on anyone who came here. Conqueror, exile, escapee, refuge-seeker, wanderer-everyone who came here was touched and transformed by a primeval electricity that crackled in the air. Something like that early lightening that forced matter and spirit to produce life on earth.

So where was this land? A bit of 'back-tracking' will show you where. This land is the grand precedent of America, the 'New World' of Columbus. The land of milk and honey and opportunity for those dissatisfied with their Old World status quos. America is today a patchwork quilt. Of white, black, yellow, brown and also sometimes little green men and women.

But the America of today is not the original. We all know that it was discovered accidentally. Discovered while looking for the Indies, the mythical and elusive Gold Bird. A proto-Utopia of diversity and yet strangely a unified hole, a cipher bubbling with transcendent wisdom. And to this ancient Gold Bird I, as Christopher Columbus, dedicate this post.