Can we have your smile please? 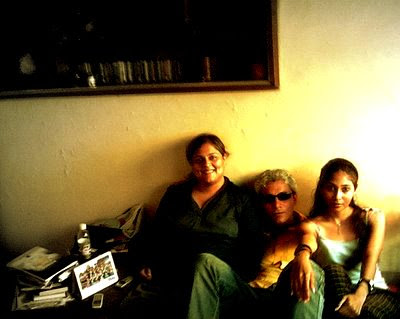 Can we have your smile please? The whole of yesterday was spent asking random people this question. Most agreed. Some didn't. Owing, I assume, to the faulty premise that a smile needs to be earned. And is not to be squandered on random people roaming the streets with a movie camera. But we didn't do too badly. The director of the shoot was a friend (left, in the picture) who is making this documentary on a friend of her's who lived in the thirteenth century.

Yes, a friend needn't be a flesh-and-blood somebody, who you meet daily. I believe a friend's largely a notion. A disembodied notion that resembles some part of your own self. Children often have imaginary friends. These friends are products of their being and display few differences from what they are themselves. As a result there's just no squabbling with these imaginary friends.

The evening before last was spent with another friend. And together we went pearl-hunting in the depths of the glorious confusion that we commonly know as Tantra. We were defending our two positions; he his academic fascination with the subject and me my mental empiricism around it.

The conversation telescoped late into the night with me insisting that the artist's search is in many ways like that of the tantrik and he sticking to his view that conflict is necessary for the creation of art (especially visual) and that resolution would mean an end of art. The conversation also forked into issues of duality and non-duality. Whether we are really blobs of individuated consciousness or whether we are all just one thing living under the illusion of separation. And whether true awareness is the realisation that everything is actually just ONE. God or Brahman or Nature, whatever you will.

The night before that the topic of discussion was tea. How brewing the exquisite Darjeeling leaves was a reflection of one's spiritual evolution. This is the strong belief of my other friend. That night I graduated (with honours) after years of tea-teachings shouted across the drawing room (also called Lounge 144) to me in the kitchen in his bid to make me a better person. That night I received the highest accolade from him in the form of this TeaTale:

These past few days my mind has been on a romp with the Egyptian Girl. It's the tune that most of us first heard in Pulp Fiction where a brilliant guitar riff follows an equally brilliant 'and I'll execute every motherfucking last one of ya…'

Having obsessed over several downloaded versions of the Misirlou I have decided that my favourite is Rabbi Abulafia's liturgical one. What I find wickedly fascinating is that the ageing rabbi's breathless singing about an Egyptian Girl.

This post is also dedicated to Ms Denmark up there in the picture who promised to the read this space only if it mentioned her but who I see coming here pretty often :)
Email Post