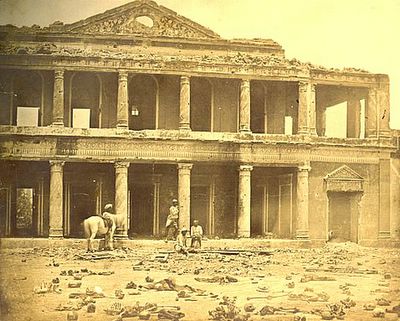 Skull and Bones: The Corinthian and Doric pillared façade of Sikandar Bagh is the backdrop of the remains of soldiers who rose in rebellion against the East India Company in 1857. This albumen-silver print is by Felice Beato, an Italian photographer, who visited India during that period. Beato made over 60 photographs of Lucknow.

A black nimbus hung over Lucknow in the days that followed the Mutiny. It was the autumn of 1857 and the British were merciless. Native soldiers and civilians, about 2,000 in number, were shot down or hung from trees or both. Their corpses were left to rot on these trees like overripe mangoes.

Lucknow was to become a lesson across the Empire.

A lesson about the consequences of rebellion.

A platoon of British troops was camping at Sikandar Bagh, a pleasure garden completed by Nawab Wajid Ali Shah to quaintly mimic late Roman architecture. The soldiers were waiting for further orders... on putting down the mutiny.

It must have been a day of relative peace as the soldiers were just sitting around, doing the equivalent of watching TV in the army mess. Suddenly, there was a loud gun shot. One soldier fell to the ground. Dead. Then fell another, then another and another. Like this a sniper's sitting somewhere in the foliage of the trees killed about a dozen Company soldiers. All without a single miss.

Then the sniper was spotted. A Company soldier shot the sniper down. On hitting the ground long hair spilled out of the sniper’s turban. That's when Company soldiers realised that their nemesis was actually a native woman dressed as a mutineer.

Who was she? And who had taught her to shoot like that?

It must have been puzzling, thought not altogether surprising for the soldiers. Because by then Company troops had been made aware of the warrior queen, Rani Laxmibai, how she was as able a warrior as any of her troops.

The soldiers took off their helmets and saluted her, gave her a proper burial.

Years later, after Independence the UP state government installed a marble bust under the sniper tree. The bust was of a Hindu woman in a tight turban standing to attention, eyes facing the road.

Till a few years ago the sniper was simply known as the 'unknown martyr'… till Mayawati gave her a name, a caste and a clumsy but prominent place at the roadcross between the Botanical Garden and the Doordarshan studios. Today the bust has transformed into an equestrian statue. Further down the road is a newspaper office.

The lesson of the Empire is all but forgotten in the cacophony of the new media. The 'Company', meanwhile, survives. It is now busy making martyrs elsewhere in the world. In countries it has no business being. The Company tells its people that it is fighting liberation wars in these countries.

Like it did in so many countries and kingdoms a century earlier. But in truth these are only 'business wars'. Fought for oil and other stuff.
Email Post
Labels: Ghost Lucknow