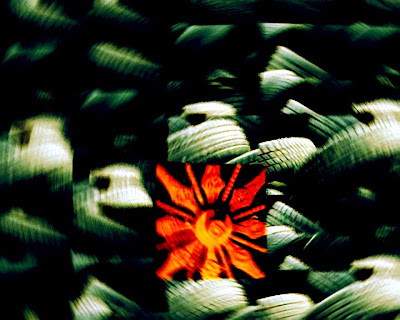 They are now faster. Tougher. And last longer.

But the game of power and dominion is soft. It works on subtleties. Suggestion mostly.

These are welcomely accepted, by all… doubly so when they are free and desperately-anticipated.

WITH the toughness of steel and soft strength of rubber, the new civilisation moves.

Freely, providing information. And Help. Love. Peace. And Freedom. To people. Turning them into obsessive finger-fuckers, of the remote and keyboard, in ways not imagined 20 years ago.

The wheels of civilisation now run on electronic gears. A new, improved and speeded-up civilisation, that requires neither arms nor ammunition.

The wheels of civilisation face no resistance. In a world that is shrinking. Getting smaller. And flatter. And more tightly wired.

An average person, on an average day can know things nextdoors, at places 5000 kilometres east and west of his own and on the moon without stepping out of his house even once.

The wheels move on 'seeing cables' or optic fibres.

They are not heard at the door but they drive into the mind directly. Subtly. Like a fever.

The old game of power and dominion is now played differently. It's now softer and subtler. Full of cunning.

The division is bloodless. And the rule, without a sceptre.

Through technology-enabled fear. And rumour.

In such a reality the enemy cannot die.

A CITY IN FEAR NEEDS RUMOURS.

A rumourified city has to have its bad guys.

‘So what if they didn’t have weapons of mass destruction, they might get them in the future… from us!’

‘So, let’s go and smoke ’em out of their foxholes wherever they may be.’

Although, five years later we still don’t know if Osama is a real person? Or if Saddam, was a real threat. Or if the Axis of Evil is really evil?