Rehab for the Dead 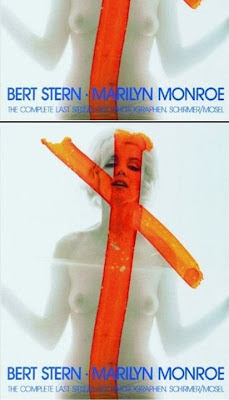 This is one of the awesomest pictures of Marilyn that I have ever seen. It's from her last picture collection (also found in a book titled Marilyn Monroe: The Complete Last Sitting) and is by a 'photo-artist', Bert Stern. Stern had three sessions with Marilyn at the Los Angeles Bel-Air Hotel in June 1962, six weeks before her death.

The European Stern has brilliantly captured the power and magic of a modern American goddess. Americans are, by habit and compulsion, apologetic pagans. They love their heroes but deny them their pedestals. Sometimes when they love them too much, they also crucify them.

Why? It is perhaps a residue of the Christian dread and embarrassment of death. Early death especially is seen as something that happens only to the wicked and unrighteous. Or to Jesus Christ. Either ways, it is a bad thing. And Marilyn fitted the 'bad thing' bill perfectly.

This picture of Marilyn crucified conjured up images of the crematorium near my old (by five days) office. I have passed this place on almost all my working days. On many occasions I have had the fortune of filling my nostrils with the smell of fresh cremation. The smell of burning flesh, hair, muscles and bones. And seeing the black fumes escape from the top of the high-walled building. Seeing in a way the transubstantiation of a fellow man. Body turning into smoke and dust. And soul disappearing dunnowhere.

Near the crematorium is a traffic-island. It's a triangular piece of road-divider and footpath now taken up by the pigeons. On occasions I have seen the pigeons rise up like a huge sheet of grey, startled by sudden loud sounds such as cracker explosions, tyre bursts or cracking dead bones.

These pigeons are fed daily by those who've recently burned their dead. It's a form of ancestor worship. In the hope that feeding the pigeons also means you are feeding your ancestors. Feeding, a bodily function, survives even death and must be carried on to show gratefulness and perhaps earn merit. That is the belief. It also works out to be a very ecological belief. Feeding. Near a place of total material decimation.

What survives this total decimation or turning into ash of the human body is memory… in the minds of those who outlive the dead.

So that dread and embarrassment are no more part of dying.

Death, it is believed, is only for sometime.

And everyone has to go through it.
Email Post
Labels: Ghost