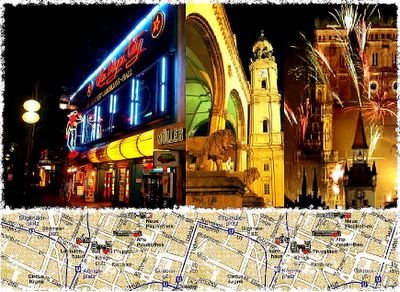 Munich in January is cold. So cold that it can make alcoholics of teetotallers. People drink and go out to drink some more. Clubbing here is done mostly to keep the soul warm and the limbs moving.

Somewhere between the Munich Hard Rock Café and the world-famous Hofbräuhaus is our joint. It's 'old world', especially by the standards of new Munich, which is leaning more towards American kitsch. Not that our joint isn't. It is, but in an old world way. It has a Marilyn-in-flying-skirt cut-out, a neon cowboy and a throb-light chick crawling on all four outside it's glass window. Advertising, that's what they're for.

A narrow staircase takes you to the first-floor joint. It's dark but luminous inside. And you are greeted by some very happy women. Most of them are giggling at jokes not meant to be funny. The place's not big enough for a dance floor but it has a stage in the centre. Behind the stage are concentric rings of coloured light that are flickering indifferently.

Most tables are empty but ours is taken, by Svetlana and her silent friend. Svetlana is tall, but unlike most German women, she gives the impression of petiteness. Like a ballet-dancer. Maybe it's her delicate features or maybe it's the beer inside my belly.

When she tells me her name my first reaction is predictable.
"But isn't that a Russian name?"
"Yes, it is," she says in clear unaccented English.
"So what brings you to Germany."
"Money."
"And?"
"Freedom."
"Which part of Russia?"
"Moscow, actually."
"What did you do there? Lemme guess… you were a cosmonaut?"
"I was a chemist."
"Wow, so is this work satisfying."
"Of course. I get to meet so many interesting men… like you."
"But what about feelings?"
"What about them? This is 'pussy business' what do feelings have to do with it?" And she begins to laugh. Her cruel and enchanting laughter.

Svetlana's friend makes up for her silence through incessant giggles. She doesn't seem to understand English. Svetlana introduces her as Julia. "Is she Russian too?" I ask her. "Maybe," she says and laughs.

Svetlana is very protective towards Julia. They're a package deal.

"You can chat with both of us. Just for a bottle of Champagne."
"Can't we settle for… say… er… beer?"
"C'mon a bottle won't kill you."
"At 100 dollars a bottle, it surely will, Svetlana."
"But I like you…"
"I like you too Svetlana… does Champagne include other stuff… you know… other stuff?"
"No you have to pay extra for everything I do for you," she winks and smiles wickedly.

My friend, a reporter from Brazil, says nothing to help, even though coming here was his idea. He and Julia are perhaps bonding silently.

Time's running on rocket fuel. And Svetlana is not even a has-been cosmonaut. She's called by her boss to another table. Silent Julia is with us. I can see Svetlana through the corners of my eyes, laughing with the other customers. The night is still young but I have an early morning flight to catch. Suddenly the music gets louder and the stage lights begin to dance in concentric circles. A woman appears on stage. She's wearing a Bavarian peasant dress that she is slowly and sensuously getting rid of. First the sleeves, then the shirt, then the skirt, and then the wig. Now she's only wearing a black bikini. And moving like an python. In her final act she pulls off the last remnants of clothing from her body as if it were a web growing on her. Free and gorgeously glowing in the flickering light she parts.

Svetlana, who's now behind us, is moving towards the stage, I ask her where she's going. "To show my ass," she says as her hand tenderly moves across my cheek.
"Don't go Svetlana!" I surprise myself.
"This is my work," she says smiling indulgently.
"Fuck it and come with me."
She smiles and her eyes melt for that small smidgen of a second and she says…
"Sweet... I'll remember you, love."

Svetlana comes in a leather dominatrix gear, complete with a whip, that she cracks a few times in mock aggression. A few cracks of the whip, and Svetlana is ready to show ass. First to go is her leather skirt, then goes her top. She looks very gothic in her black lingerie and whip. Her dance is a game of allusions and promise. And a proud nakedness that only the gods are capable of. I have moved to the table closest to the stage. Svetlana's eyes barely leave me. The rest of her clothes slide off her like water drops from leaves. She is now standing in her black panties moving tantalisingly to the rhythms of an imagined hip-lock. Eyes closed she yanks off the last patch of cloth from her body and the room gets a view of what used to be her private parts.

She blows me a kiss and disappears. Swallowed up by the oldest and hugest multi-national corporation known to man.

Next I know, I am on the plane, flying above Munich while Svetlana sleeps dreaming of money and freedom.
Email Post