House of the Fourth Friend 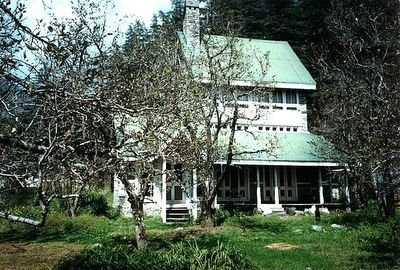 Manali, 1999: A huge chunk of land on which this house is built was eaten by the river last time it was in spate. But there's still enough space to walk around it without staring down a sudden crag. The road from here runs along the river for what seems like eternity. The house has a force-field that is difficult to ignore. It makes heads turn, vehicles slow down and dogs feel obliged not to piss on its wall.

It's not a big house, but looks comfortable, aloof and lost in deep contemplation. Its gabled front door doesn't face the iron-grill gate that opens on the road. Instead it looks out on a patch of hobby trees--some apple, some pomegranate. The house has the isolation of a palace, caught as it is between the river and the mountains.

We have stopped at the mechanic's just outside the house to get our bike fixed. It's taking long, so I decide to walk, stretch and exercise my back and shoulders, while my friend waits upon his ailing silver-jubilee Enfield.

The iron-grill gates are open, not fully but just enough, so I enter, wanting to capture the house in my camera. A black dog stares at me blankly, too lazy to bark, too tired to chase. But my steps are tentative. I don't know whether there are other more ferocious dogs lurking there somewhere.

"Don't worry... he's tied." The voice is coming from the verandah next to the gabled front door.
"I am sorry for intruding… but the house… err.. your house… just wouldn't let me pass."
She smiles. The man with her smiles and nods.

"Can I take a picture of your house?"
"Yes, please go ahead. But first we shall make ourselves scarce."
They stand up to go inside.
"No, no please don't… You make the house look good."
"Oh come on, two old fogeys can't do that. You will have to go ahead without us."
She smiles and both she and the man go inside, using their folded cloth-backed chairs as walking sticks.

The house smiles at the camera and gives it some great pictures. When I ring at their door to say thankyou and goodbye, she surprises me.

Pleasantly surprised I go out and call my friend who says the repair would take longer. He tells me to go ahead and have fun and that he'd join me later.
"Is she young?" He asks smiling mischievously.
"Yup, extremely."

A menacing-looking antler is staring from above the their cozy drawing room fire place. They look comfortable enough to welcome a stranger in their house.

"My morning drink's whisky, what's yours?"
I am beginning to like them very much.

"Umm… the same."
Gold-filled glasses with ice cubes and soda are raised in a toast to the road and to travellers and an old familiar conversation begins.

I feel the need to light up and ask if it's okay with them but she answers me with another question. "Do you think I can bum a cigarette off you. It's been ages since I had one."
"Sure? What about you?" I ask the man. He refuses.

The sticks are fuming and the glasses are on to their second refills. We're like old friends from another lifetime, catching up from where our road forked out in different directions.

"We used to be three. G died last year."

Three friends. Two men and one her, who married neither but loved both. So they decided to build a "base camp" in Manali for the half year they spent travelling in the hills. Away from Bombay where their professions kept them trapped and occupied. The men were businessmen and she was a school principal. All Gujaratis, one of the most oppressively traditional people in the world.

"Must be tough?" I ask.
"We never cared," she says, her young, horn-rimmed eyes gurgling like whisky topped with soda and ice.

"We used to go for these long, long drives… suddenly without a plan. Just a toothbursh and a swim suit. The road was our fourth friend. We found this place during one of our travels and decided to let our anchors down."

I am too moved to react. They seem to have lived the life, held back neither by fear of scandal nor anticipated regret.

Two hours pass, the bottle of whisky has now entered our three souls like so many bottles of whisky must have penetrated so many souls, meeting for the first time.

"Does the house have a name?" I ask feeling warm and awesomely touched.
"People here know it as the 'Bombay Kothi' but we call it SNUG House."
"Cool."
"You know what SNUG House stands for?"
"Nope. Tell me."
"It stands for him: S, me: N and G: who left us last year."
"And U?"
"That's you!" And she laughs the most free and lilting 75-year-old laughter I've ever heard or seen.
Email Post
Labels: Ladakh