I always look upon demolitions with mixed feelings. Most of us do too but like to keep the feelings mixed and to ourselves. In, I guess, the interest of a wider ‘human interest’. We watch silently, but with gaping mouths and moist-eyed, bulldozers work the ground, like hungry locusts devouring a field. Reducing with their steel mandibles walls to pieces of brick, doors to shards of wood. Creating debris. If you believe in the Big Bang then our Earth too was made from the debris of a cosmic explosion.

And look where we are now. 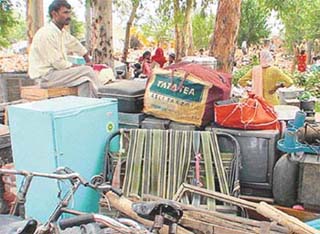 Space is there to be had. Claimed. And reclaimed. We have reclaimed land from the mountains, from the forests, from the sea. From monkeys, dolphins and other herd animals. Ourselves included. To build bigger, better buildings. For bigger, better people. To live in. And gloat. And say pretty things about architecture, progress and development.

Delhi is also the famous City of Demolitions. It’s been demolished several times over and still continues to order ‘demolition drives’ every now and then. One just happened near where I live some days ago. And I can’t deny feeling mixed and confused looking at the bulldozed piece of land. But then I saw my feelings on the faces of the ‘victims’ as well. Sitting outside their ‘illegal’ slum they didn’t seem to see it as a tragedy. Their life already seemed ready and waiting. Their bag, baggage and kitchens are back on the road once again. Their booth squats are thankfully still intact! Tomorrow they’ll start again, wherever the government feels fit to relocate them. They’ll make new homes. New kitchens. Erect walls where there were once wild, untended, unbuilt spaces. And live happily ever, till the next demolition drive.

Delhi is a veteran of demolitions. And she feels no sorrow for these people. She even takes a sadistic delight in their plight. Because for them no space is holy. None inviolable.

But there is a larger wisdom at work here. Every building is actually a re-building. Nothing is got from nothing. Land is dug out to bake bricks. Steel comes from mountains of ore. Something always has to be broken for something to come up. Some Big Bang has to occur for creation to begin. Such is the logic of creation. And such is the nature of our tragedies. In the end it’s all one big turn of the CYCLE. Phew!