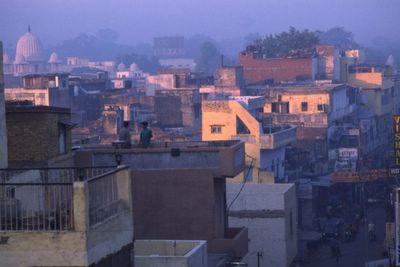 His name in translation means THANKFUL. But actually, he’s Lost. Stranded. In India. The cuss words he’s picked up in Hindi have their inflections right. Like the locals. His time here has been devoted to ‘higher education’. A painful process for which he’s had to pay through his nose. Like the education, the fee’s also been extracted from him in various painful ways. He says now he’s too old for adventure. In his country he’d be minding grandkids. But here he’s just a name. Thankful. And he seems to like it that way.

“I have no identity here,” he says with a toss of his grey and thinning mousetail. It’s part of the atmospherics! Most likely he's majored in sponging sympathy. For people, he has a knack. For places too. He knows his place of learning like the back of his hand. Paharganj means different things to different people. To him it’s a residential university. He knows its bylanes like the bulging veins of his hands.

He has a room in one of the cheaper guest houses. Cheaper in Paharganj would mean about 40 to 60 bucks a night or a monthly flat rate. When we go to his room to collect some of the stuff that he sells, he shows me around. His room is light-proofed, covered inside in fading curtains and magazine pages. To keep the light in, at night, as in a war zone. He’s not too fond of daylight either.

In the streets he is like a celebrity. People call out to him. The beggar kids know him as Toffee Uncle. But he likes to keep his popularity under wraps. A bit like his room. He doesn’t want many people talking about him. He doesn’t want his fame to reach the cops. Because they may want to make some money out of him. What happened to his papers, I ask, by the way. “Robbed,” he says without emotion. What about his embassy? “But I don’t have proof,” he says suddenly exasperated. It’s like he’s trying hard to forget something. Something whose robbing was perhaps much looked-forward-to or maybe planned. Later, over dinner, he mentions Beirut, where he spent part of his growing up years. “The world was an easier place then,” he says longingly.

In Paharganj the world’s still ‘an easier place’. For him at least. In his dictionary, work or the generation of money is a creative enterprise. He has learnt a thousand ways of making it. One of them includes buying and selling of invisible stuff. Stuff that the law doesn’t want to see sold. And people don’t want to be seen buying. And sellers don’t want to hear about it once it’s sold. Thankful sees himself as a contraband superstore. “You want E? Coke? Russian babes? Indians? No problem, I can get you anything.” The deal is simple. You show him the money and he will get you your favourite contraband.
Email Post