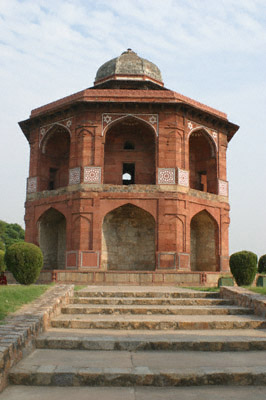 Delhi, 2005: Old Fort, also Purana Qila, meaning old fort. A bland neutral description chosen to end issues of provenance. Books and historians tell us that it could have been the site of Indraprastha, the fabled Pandav capital. Books and historians also say that Humayun, the second and the most unsung of the Mughals had chosen the site for his city. Dinpanah or Refuge of the Faith. Which faith, we are not sure.

Interestingly, Humayun did not use the ‘-abad’ suffix that most of his predecessors chose for their cities. Except perhaps Muhammad-bin-Tughlaq, the Mamluk Madman, who called his city, Jahanpanah. Refuge of the World. Roughly, Dinpanah would translate to Dharmapad or City of the Dharma in Sanskrit.

Dinpanah was later conquered by Sher Shah Sur and turned into Sher Shahi, his own imperial capital. Among the many buildings Sher Shah added to Sher Shahi during his short reign was Sher Mandal or the Lion’s Orbit.
Lion’s Orbit is a funny building. Doesn’t say much. Spectates mutely as mute spectators are prone to. Yet it is a building that draws people. You can’t just look at it and move on. It makes people linger on. And listen, in a strange telepathic way, to its amazing life’s story.

Here’s how it goes…
“We live longer than the people who make us. We aren’t just things of stone. And mortar. We have our lives, our eyes and memories. We are basically ideas. Manifested and realised in space and time. To the writers of history, we are simply built. I was built by Sher Shah Sur. But I am older than him and that. I was built octagonal, of red sandstone, with staircases leading up to a canopied terrace. I was unique because there were few like me. I was built for no apparent intent. I was built to be a commemoration. A monument. Sher Shah called me Sher Mandal because I was going to establish him as the centre of his universe, his city: Sher Shahi.

“My foundations are made of stones from the palace of illusions (refer: Mahabharat). The palace where water looked like stone and stone like water. This was Sher Shah’s way of claiming immortality. But Sher Shah was a wise man. Not many people knew about the foundation stones except the King, his chief architect and the raj purohit, yes even the sultans had raj purohits.

“I was dedicated to Sher Shah, the Lion King, and whoever dared to claim me was sure to see his fate rebel. When Sher Shah died Humayun, the Mughal, came back to claim his fort city. He broke down many buildings, built some but he did not touch me. He was fascinated by my strange beauty and audacity. Star gazing was one of his many kingly preoccupations. So he began frequenting my high terrace to look at his beloved stars.

“Humayun was a seeker and a worshipper of beauty. Some learned people had advised him to offer salutations to Shukra (Venus), the Evening Star, the bringer of light. That, they had said, would help him find what he was looking for. The King, now not as young and robust as he used to be, began coming to the terrace every evening to offer salutations to Venus. One evening, when he was gazing at the Evening Star, he heard a soft whisper. It was like a voice broken down by the breeze. ‘Hu-maaa-yun, Hu-maaa-yun, Hu-maaa-yun’.

“The King was astounded because all his life he had been waiting for this voice. He stood up and answered, ‘Ya Allah, I can hear you.’ The voice did not stop. It just kept calling out his name.

“Humayun then figured its source. And the poor man started going towards the voice: without help, without guards, because his evenings at the terrace were his time alone. He didn’t want the guards spreading stories about the his kafir ways. So alone Humayun began his descent towards the voice.

“The voice was small but effective. It dissolved my staircases into empty space. And stairs appeared where there was empty space. The King in his excitement kept walking towards the voice. Walking, towards a wrong set of stairs. At the edge of the terrace he stopped. I could sense that he was seeing a vision. Paradise. A place he recognised from some earlier visit. Humayun, the opium-eater was in Paradise often. But that day he had had nothing. In years, facing reality. And he could see it as clearly as I could, him.
He took his final step. A thud. The King hit the stone floor.

“Two days of nightmares and voices later, Humayun breathed his last. Sher Shah was a wise man. He knew what he was doing when he built me. I, an idea cast in stone, became someone's nemesis. Once more, a palace of illusions.”
Email Post
Labels: Ghost