Inside a Mixing Bowl 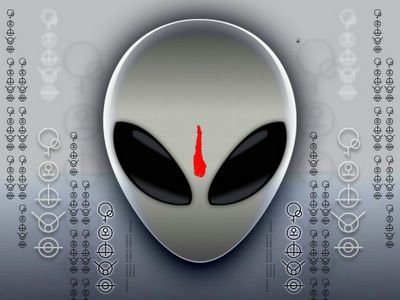 I must have been 10 or less when I saw my first alien. I knew about it from my street friends who were all rushing to see it. “You don’t want to miss it, do you?” they said which was enough to get me started. We were old enough to tell fact from fantasy, but also young enough to be wide-eyed at the possibility of seeing the two mix. It was a long walk to Maqbara. Entered in through a grand gateway on the trendy Hazratganj or Lucknow’s main MG Road as most city main roads in India are called, Maqbara was a largish square mausoleum compound lived in mostly by Anglo-Indian families. Why these mixed race people chose to live so close to the dead of another mixed race people I have never been able to figure out. But no one actually thought of Maqbara as a mausoleum. For most people of the city it was just another mixing bowl of people, ideas, histories and culture.
The dead alien was neatly laid out on a small jute khatia, on a piece of red cloth. It was draped in a string of red hibiscus blooms and smeared on the forehead with Vermillion. Incense sticks were lit around it and people tossed change into a small bowl near it. It was a small fee that curious folk didn’t mind paying for being brought face-to-face with a freak of nature. I don’t know what stories these people carried back with them. Mine was threadbare and riddled with questions.
The darshan was organised by the owners, occupants of Maqbara’s smaller servants’ quarters, who rarely got an opportunity to be in the public eye. In the crowds that came to look at the freak there were murmurs of it being some sort of an avatar. But even if it was an avatar it looked pretty useless because it was in no condition to help anyone as avatars are supposed to. There were other murmurs of it being born of the union between man and goat. This gave our budding imaginations a bigger kick. Just thinking of the impossible positions of the union.
The alien was not more than a foot and a half long. It’s skin pale was like human skin. But for limbs it had trotters, like a goat’s. Its face was the most striking. Almost human with perfect eyes that were half shut. It’s mouth was lipless and protruding. Two struggler horns sat above its temples like boils. Its mother, a jet-black bleater, was tied nearby, also garlanded and given fresh grass for the effort.
I don’t know what happened to the dead goat kid but we saw its grainy black and white picture staring with its half-shut eyes from the next day’s papers. Unexplained like one of The X-Files riddles. But somehow hugely sense-making to us, people of the mixing bowl .
Email Post
Labels: Lucknow