Parallel lines are supposed to meet at infinity. Or never. But these touchy feely parallel lines keep falling into each other’s arms. It’s not love, but necessity. The screaming, kicking metallic clang of necessity. It’s necessity wound tightly inside electric-powered engines.

These steel lines have their stomachs sucked in at the points of their necessary embrace. Like Roman tens with not enough leg space. Trains change tracks at these points of not enough space.
Trains never leave these tracks. But the tracks don’t go anywhere. They just look like they’re travelling.

They seem to move with you if you’re looking down at them from train doors and windows. Far, in the parallel distant, they are as stationary as their makers intended them to be. 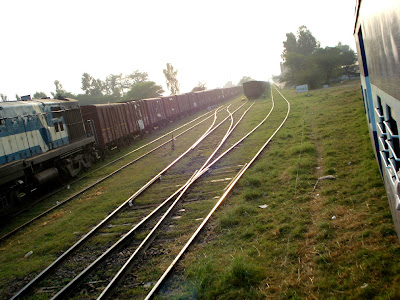 These tracks are clasped on to ribs of hardy wood with twisted eight-shaped claws. The wooden ribs in turn are nailed to foundations of cement and broken rocks. Trains unlike cars don’t run on air-filled rubber. Trains run on discs of steel that become invisible with speed. At these times the steel discs are just flashes of coloured wind. It’s as if there’s nothing else but coloured wind between the trains and the tracks.

Sometimes at high speed and on sudden braking the steel-on-steel friction produces fireworks that scream and enter people’s heads like cold ice picks.

These tracks are actually fallen ladders, forced flat on the ground by the force of necessity. They don’t go anywhere. They just give the impression of movement.

Tracks are very confusing because within their bracketed space they hold many contradictions. Of necessary meetings between fallen ladders made possible by twisting the principles of infinity. All in an effort to make things move.
Email Post