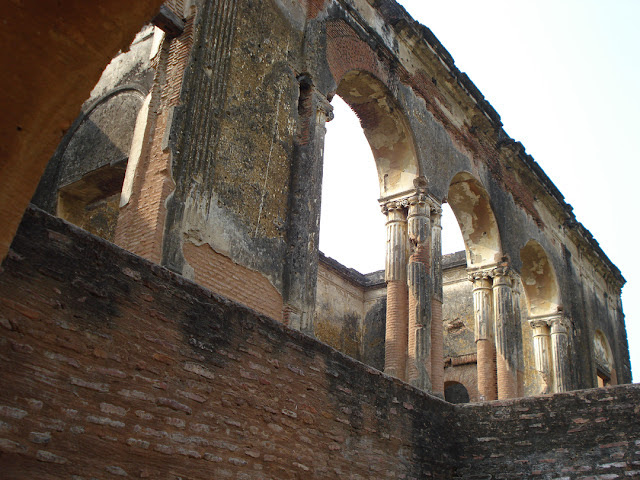 In the roofless, brick-exposed palace of King Wajid Ali Shah, there roams—some nights—the portly form of the late king. Behind the king goes his retinue of dancers and music makers. The king chooses the nights of his appearances. No pattern or almanac can be affixed to his visitations. Those who have seen the spectacle of the king’s song and dance are so enamored of the vision that they are left incapable of enjoying anything else.

Many of these people keep coming to the roofless palace in the hope of catching a glimpse of the king and his party. Sometimes they get lucky, most times they don’t.

Munni Bi was collecting firewood in the circle of trees outside the palace when she heard music. The music was ebbing and flowing like the moods of the sea. Munni Bi was drawn to the palace like a puppet.

When inside she saw Wajid Ali Shah sitting in the centre of the main hall. The king was shirtless, dyed indigo blue and dressed in a rough-cloth dhoti. In place of his boat-shaped crown was a jewelled crest and a peacock plume. The king was playing his flute.

Around him was his dance and music party. The palace was reverberating with music the kind Munni Bi had never heard. And then suddenly all music stopped. All dancers froze in their glorious arabesques. The king looked at Munni Bi and motioned her to step forward. When she came forward, the king said, “Close your eyes, and listen hard…”

When Munni Bi closed her eyes she saw the fat king change into Krishna, the beautiful cow-minder. The king was Krishna and Krishna was the king, and Munni Bi could not tell the difference.

In his desire to be Krishna, the king had become a victim of vanity. The mirror had become his best friend. He would sit before it and sing and dance and write odes to himself as Krishna. Then one day Krishna appeared before King Wajid Ali Shah. The beautiful cow-minder said because you have served me and loved me I will give you a boon. But because you have done so thinking you were me, the boon will come with a curse.

The boon-curse made Wajid Ali Shah everything that Krishna was but to his best-friend, the mirror, he became invisible.

And since that day Wajid Ali Shah has been coming to the roofless, brick-exposed palace, to sing and dance and play his flute. And to catch a glimpse of himself in the tiny black holes of human eyes.
Email Post
Labels: Ghost Lucknow